He Needs Urgent Surgery: Critical Condition Of A 16 Year Old Molested By 6 Men At Agogo

Kwaku Enoch is currently battling with his life at the Agogo Presbyterian Hospital. He is seen lying helplessly on one of the hospital beds covered with a white cloth. The only option left for him to survive is surgery. The 16-year-old boy was tortured by six strong men after he allegedly broke into a shop and tried to make away with money and items.

The young boy was not spared after he was caught and the six men subjected him to severe inhumane treatment. Their act has widely been condemned and the police have intervened to arrest them. They are currently facing various charges at the Agogo District Court.

But since the six men inserted a stick into one of the private parts of the young boy, his condition is currently critical. Initially, the young boy developed low blood pressure, the doctors also realized that he is battling a severe fever. These conditions could have ended the life of the young boy due to the torture he was subjected to.

He is severely infected and the doctors at the hospital are doing their best to ensure his condition is stable. The doctors are preparing for surgery to ensure his private part that was affected is fixed to bring him back to normal life. If the situation becomes worse, he would have to be transferred to a bigger facility or outside the country for safer surgery. But the Medical doctor in the facility, Dr. Emmanuel Mensah has promised to do his best for the young boy to live.

Due to negligence and mob justice, the life of a young boy is currently in danger. The mob and the shop owner could have invited the police to discipline the young boy instead of taking the laws into their own hands. Such acts must not be repeated anywhere. We must all frown on mob justice. 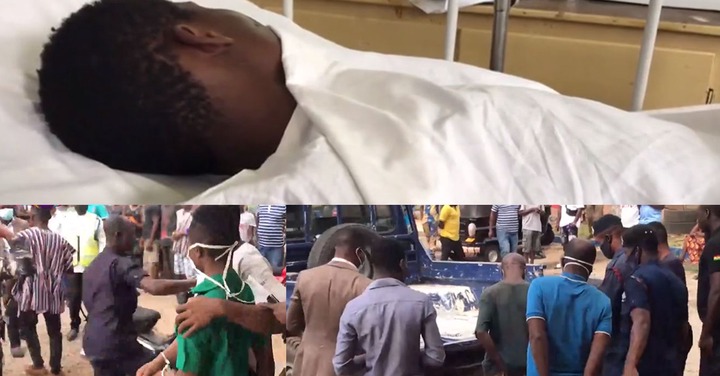 However, the act of the young boy should as well be condemned. If a boy as young as sixteen years can break into a shop (allegedly), to make away with money, then what happens when he attains eighteen years? Parents also have a role to play in training their children to be responsible citizens.