The chief and people of Manwe traditional area in the Wa East District of the Upper West Region have expressed their displeasure over the actions of the joint security forces that invade the Manwe community on Thursday.

The forces destroyed some properties that are said to belong to some residents who were suspected to be illegal miners.

in an exclusive interview with some of the victims on Friday mentioned that Mining equipment belonging to foreign nationals were burnt during the operation. The news team heads by Iddrissu Dasana also observed that, electric meters, Motor king, and a borehole which the community members and some of the miners contributed and drilled was burn as well. 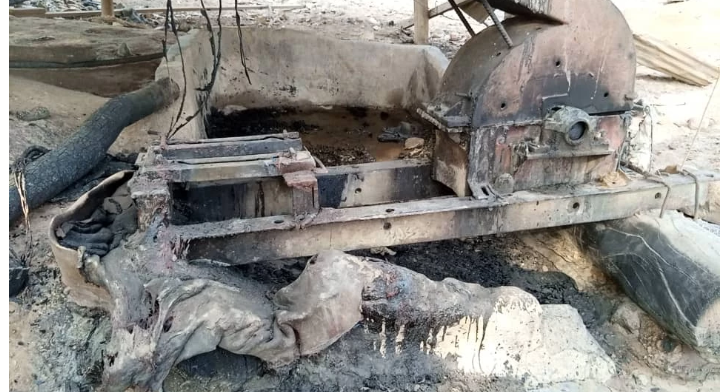 The paramount chief for the area, Naa Abubakari Yussif Wiah II, said he is not happy over the actions of the joint security forces, adding that he was disrespected because he was not informed before they came to his traditional area.

Naa Abubakari Yussif Wiah II, therefore called the Upper west regional minister and the Military command to engage the chief and elders of the area anytime they want to carry out such operations.

Meanwhile, a total of 386 suspected criminals were arrested for various security infractions in the ongoing joint military operations in the Upper West, Upper East, Northern, North-East, and the Savannah Regions.

Brigadier General Emmanuel Okyere, the National Security Advisor, who disclosed this in a media briefing in Wa on Friday, November 26, 2021, said the multinational joint operation dubbed: “Operation Koudolgou” was the fourth in the series since the Accra Initiative in 2017.

He noted that the main objective of the operation was to fight terrorism and transnational organized crimes within their common border to free it from both illegal and criminal activities within defined areas of operation.

Brigadier General Okyere said the operation took place in all five regions of northern Ghana and in the same areas of neighbouring Cote D’Ivoire, Burkina Faso, and Togo.