More details: Angry husband attacks man with cutlass in Adum for sleeping with his wife

A new video is trending online from the Ashanti region of Ghana in Adum which shows a man in a red cloth attacking another alleged wealthy man who happens to be the driver of a Land Cruiser with a cutlass while in traffic.

In the video, the man who was in red cloth approached a V8 Land Cruiser while in a traffic. He was seen walking toward the driver’s side and after speaking a few words, pulled out a cutlass from his cloth.

He went to the drivers seat and tried wounding him with the cutlass but before he could reach there with the cutlass, the alleged wealthy man came out of the car and took to his heels around the car. 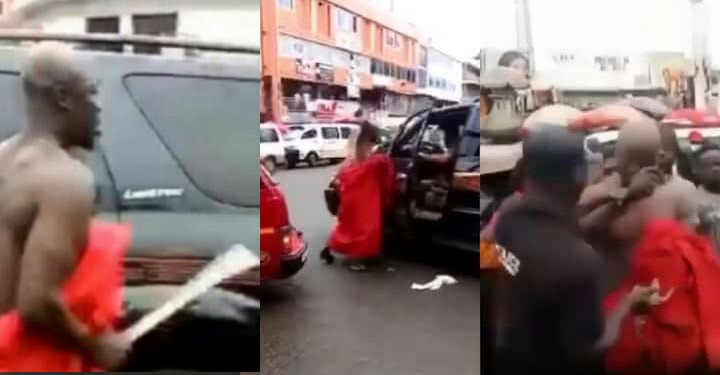 The furious man chased him but was soon stop by passers-by and witnesses who seized the cutlass from him and summoned the cops to come and arrest him.

After the arrival of the cops, they collected the cutlass from the man in red and handcuffed him. The security personnel detained the driver of the Land Cruiser (alleged wealthy man) who was trying to keep distance from the from furious man to avoid being hurt.

The back story to the attack alleged that the driver of the Land Cruiser had slept with the wife of the man in the red cloth, leading to the dispute. Some people were heard in the video asking the man in the red cloth to calm down since attacking the alleged wealthy man was not going to solve the problem but make it rather worse.

According to eyewitnesses at the incident, the unhappy man said that the other man had been bothering his wife to the point that he was able to persuade her to sleep with him.