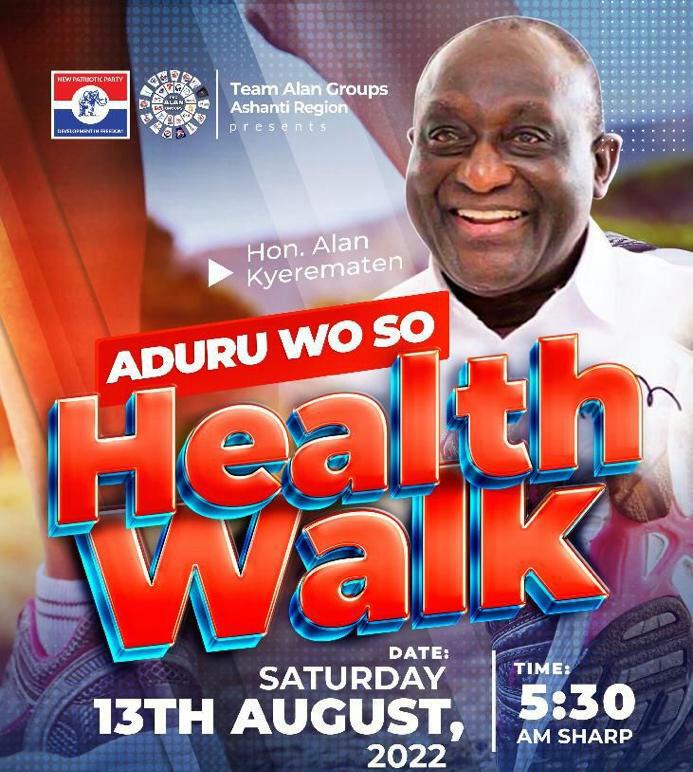 One of the key members of the August 13,2022 Allan Kwadwo Kyeremanteng Health Walk organisers, Mr Abraham Boadi (aka Opooman)has unreservedly accused some journalists who took coverage of the program for allegedly having bad intentions to engage in irresponsible journalism to the contrary to the ethics that govern the profession.

Opooman former Assembly man and Presiding member of the KumasI Metropolitan Assembly respectively made the accusation at a Kumasi based privately owned radio station, Opemsuo Fm in reaction to some allegations levelled against the organisers of the program of which parts linked to alleged financial misappropriation.

Monitored by the Opera News correspondent, Opooman asserted that the publications that certain journalists preferably splashed them on their banner headlines were completely fabricated to incite political hatred against Mr Allan Kyeremanteng.

The former presiding member member mentioned allegations of busing party supporters from other regions to participate in the walk, disbursement of ghc50 as acceptance fees to hired walkers and alleged pocketing of funds meant for some selected groups.

Abraham Boadi said the organisers of the walk were taken aback to read the various fabrication and sensational stories from the media platforms that never took place before and after the program.

According to him the program was expected to be attended by 7000 participants, but out of love the the people have for Allan Cash hence many people travelled from other places to take part to make the program a successful one.

We never provided buses for the people nor negotiated financial issues with anyone to bind us to compensate them after program, he defended.

Imagine if we bused the over 200,000 walkers and promised to pay them where can we raise that amount to embark on the task, Opooman asked.

Opooman alleged that from what he experienced from certain journalists after the peaceful program suggests clearly that journalism these days has lost its credibility in the country.

Nothing wrong happened after the peaceful health walk and l am through this radio station advising journalists who are not ready to speak the truth to resign peacefully from the noble profession before their conduct throws the country into choas, Mr Abraham Boadi insists.