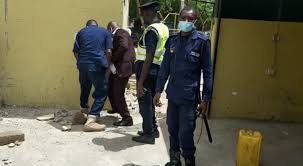 Michael Dakorah has been jailed over his actions in the usage of Pepper spray in Obuasi Akatakyie. Akatakyie is a developing community within the Obuasi Municipal of the Ashanti Region. It is a community of farmers who are mainly teachers or retired civil servants. It was in the early days when civil servants were posted to Obuasi and Dunkwa to work, but couldn't get housing accommodations which made their job a hassle. The then king of Obuasi Nana Akatakyie Afrifa gave a vast land which was at the outskirts of Obuasi, for anyone who honoured their transfer to the town to work. Nana did that to boast civil postings in his town, and the natives and first settlers named the area after the King who gave them the lands. It is filled with retired workers and their descendants who were posted to the town in the early fifties and eighties.

Because of the calmness in the community, trouble and thievery have been on the lookout. It was on Tuesday the 30th of March when Agya Appiah a retired civil worker who lives at Akatakyie, was returning from his farm. The man who used some of his pension payments to invest in a motorbike and his farms, was stopped by Michael Dakorah when he was coming from his farm around eight forty in the evening. Agya Appiah was ridding on the same Akatakyie road he has been using, ever since he was posted to the town in the eighties to serve, when he saw someone standing in the middle of the road at such an hour. It was Michael Dakorah who stopped Agya Appiah and did so because of his motorbike and money.

Michael wanted the motorcycle and cash of the old man and when he resisted, he used pepper spray on the man which made him lose balance and fall. He proceeded by adding beatings to the wounds of the old man and gave him a hell of beatings on that night till he felt weak. He emptied all the pepper spray mini cylinder can on the old man before leaving him to die. Three hunters who were hunting for meat were returning from their hunts when they heard a voice crawling to their direction. They advise themselves and went looking for where the voice was coming from. They found Agya Appiah almost lifeless and couldn't breathe.

Agya Appiah was able to tell them it was robbery before he collapsed. Two of the hunters chased the robbery gang Agya Appiah told them about, while the other hunter sent him to the hospital. The two hunters used the curve short cut through the Akatakyie forest to the other end of the road and they were lucky to get in front of Michael Dakorah before he got away. Kwesi, the long-range hunter aimed at the motorcycle tyres and was able to blast it with a single shot which rolled Michael Dakorah over, before they were able to self arrest him.

Michael was handed to the Obuasi Police who took him to court on 6 April 2021. He was remanded for one week and presented back to the court this morning when Her Ladyship Mrs Boahemaa sat in her chair to listen to the case again. Michael Dakorah pleaded guilty and begged the court for forgiveness. Her Ladyship Mrs Boahemaa asked If Michael had leniency when the old man was begging for his life before he almost beat him to death, but Michael could not respond and cried. The judge in her power sentenced him to 15 years of hard labour so he can learn his sins in jail that criminality is never accepted in Ghana. Michael will start his jail sentence today as he will be processed to Kumasi Central Prisons this afternoon. 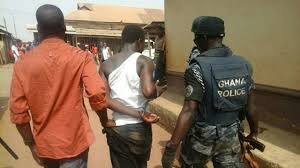 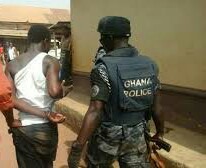 GPL: Hearts of Oak need to redeem their image against King Faisal

Ever wondered why the word 'Ambulance' is spelt backwards in front of Ambulance cars? See reasons.

40 Days of Election Rallies Didn’t Raise Covid, But One Day Demo Would?

Finance Minister Is The Biggest Obstacle In The Road Sector-Hon. A. B. A. Fuseini