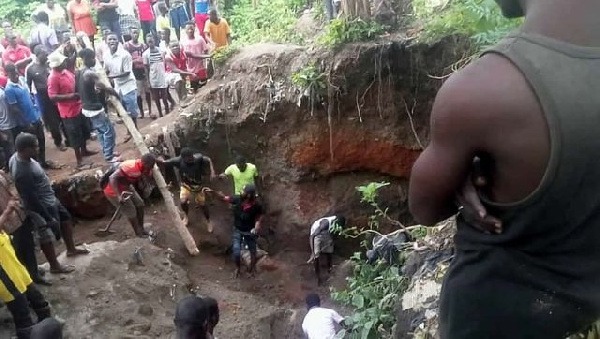 Despite the horrific experiences associated with the operation of galamsey pits in the country, there are sections who for the love of money still take the risk to go into the depth of the earth to mine gold. From the Wassa Essikuma village in the Prestea Huni Valley Municipality of the Western Region, about ten young people have lost their lives in a galamsey pit they were operating last night.

A dozen more were injured but managed to crawl out of the debris to the surface. Late in the night, an excavator they used for the operation was powered up to exhume the bodies of the ten people who got trapped in the mine pit.

Preliminary investigations revealed that the canals that were dug by these illegal miners were not fortified. In this rainy season and considering the geological condition of the mining site it was far riskier to go underground.

But these miners mostly strangers and a few community folks overlooked the risks. It is not established yet how it all happened. The surviving victims are already traumatized by the incident.

In a joint operation by the National Disaster Management Organisation (NADMO) and the Police, the dead bodies were moved to the local morgue for processing while investigations are conducted into the accident. A resident of the community, Kwame Bukro said the pit caved in at midday on Thursday but for the lack of logistics the owner of the site couldn’t initiate the rescue process.

The miners were all trapped for hours and with time some passed out due to suffocation. Others were also crushed by the debris and earth. It is said that the mining pit has been operating illegally without any safety measures. Some rituals are expected to be performed for those who lost their lives in the pit lest it would become haunted.

According to reports, this is not the first time a mining pit has caved in on people. It is expected that the owner of the concession would be invited for interrogation by the Police.

For Ladies : Do These If You Do Not Want Lose Your Boyfriend To Another Lady

Stop What You Are Doing And Bring The E-Levy To Parliament: Haruna Iddrisu To Ursula Owusu