By InventorDarko (self meida writer) | 9 days

Many journalists' lives are jeopardized around the world as a result of their reporting. The modern world in which we find ourselves seems to value lies over fact. George Abanga was a good journalist who lived with his family in the Brong Ahafo area. On September 10, 2015, George Abanga, also known as King George, was driven back home when he learned the road was blocked.

He was shot on his left arm, closer to his shoulder, by an unidentified individual who emerged from the brush. Abanga was rushed to the Brong Ahafo Regional Health Center, where he was pronounced dead shortly after arriving due to profuse bleeding. 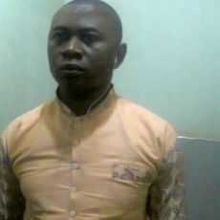 Prior to his death, he had reported on a cocoa fertilizer theft that was going on in the region. He had the sum of Ghc 160 in his wallet, two mobile phones and a motorcycle but his killer never touched any of these which made the police to suspect, he was assassinated because of his work. The police issued a statement saying, ''we can only assume this was a murder case since the victim is not around to explain matters to us''.

Later a man believed to be in his middle 40s confessed that, he was the one who killed the journalist. He added the ghost of Abanga was tormenting his life to speak the truth. May his soul rest in perfect peace.