By Estherinfo (self meida writer) | 20 days

Domestic violence is something increasing daily in the home of married people and even people who are not married yet. Some have managed to survive and tell their story while some were not able to make it alive.

Just recently, A man Emmanuel Asemota has been apprehended by the Police force for allegedly beating his wife to death after they had an argument. 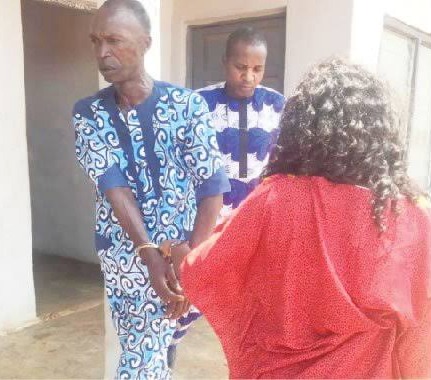 In a video you are about to watch after reading this content, the spokesman of the Police Command, Bello Kontongs said that the man was apprehended thanks to his neighbours who called saying that Emmanuel has been beaten his wife Victoria Asemota and she is in coma.

The neighbours stated that they have taken the victim to three different hospitals but she was rejected due to lack of security personnel together with them.

The police then aided her admission to the hospital only for her to died 7 days later. Before she died she revealed that she got beaten to stupor by her husband only because he called her to his room but she told him that she was tired. He then went after her attempting to break the door to enter the room. Knowing fully well what would happen and out of fear she tried escaping through the window but was intercepted by the man. That is where he started beating her mercilessly.

She mentioned that he followed her to her room and attempted breaking the door, because she knew what will happen if he succeeded in entering the room, she tried to follow through the window and go out but he blocked her and started beating her till she lost consciousness.

While being paraded, the suspect stated that he beat Victoria to death because she refused to come to his room and sleep with him after he called her. He mentioned that he has been together with her since 2002 and they have two children. The suspect added that he did not intend to kill her, but unfortunately, she died after the incident.

This is 2021, I can’t believe domestic violence should still be a thing, I think this is a lesson to men. Yes when you are married no one should be denied intercourse but when a partner is not in the mood or is tired you should make sure you respect it and try to make them feel good maybe it can even change the whole mood for the night or whenever.