Drinking blood in this tribe isn't a problem. Meet the Suri tribe of Ethiopia

By the_Kelvin_guy (self meida writer) | 17 days

I wouldn't have believed if someone told me there are actually people around this world who drink blood. I've heard of people who once feasted on blood but only in movies. From childhood, whenever I heard of "drinking blood", the word that came into my mind was "vampires".

What if I told you there are people in this world who aren't vampires but drink blood? I have been made to believe that movies are manifestations of reality

Well, let me take you to a tribe in Ethiopia known as the Suri tribe where drinking blood is no news. I am sure many cultures around this globe would find this culture loathsome but we'll, what one finds disgusting might be what another finds entertaining.

Aside they drinking blood, one shocking thing about them is that, the Suri tribe of Ethiopia belives that for a cow to produce more milk, you must "eat" its "sacred area" and caress its udders.

It is said that the Suri tribe do not feed on cattle unlike other tribes who find delight in tasting the flavoursome meat of cattle. Cattle are their most expensive property and are only offered as sacrifices during special ceremonies and sacred occasions. 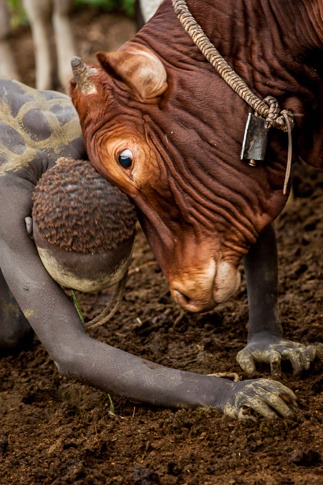 They don't feed on cattle but they find delight in tasting their blood and milk. It is said that they say the milk and blood of cattle are very essential food sources in their tribe but there is one limitation, the women in the Suri tribe are not allowed to drink the blood of the cattle.

You would expect equality when dealing with stuff like these. Why should women be deprived of such an essential food source? The answer to this question is simple. The women are not warriors. The blood is only taken by warriors so as to provide them with strength ahead of battles and men are certainly the ones who show up in battles. The Suri warriors believe the cow's blood is loaded with vitamins that keep them fit and makes them strong.

Well, I hope there is a scientific meaning to this.

The cow's blood is to make their muscles tough and help them overcome the violence expected of the battles. In obtaining the blood from the cattle, they make a small incision in the carotid artery of the cow with an arrow or a sharp knife. They then drain the blood in a bowl and feast on it like it is beer. 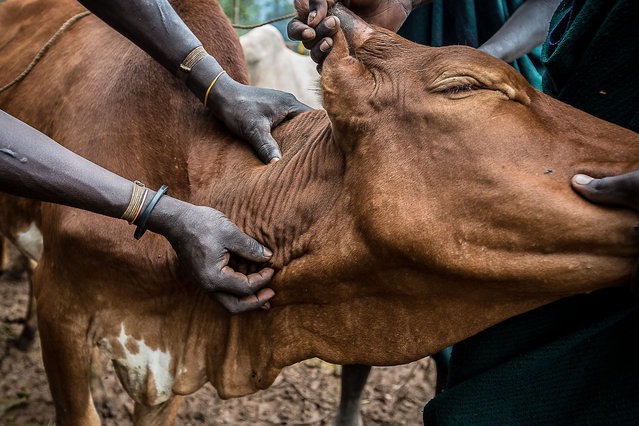 An example of the battles they engage in is the battle of Donga which is also called the stick fighting festival which is held annually.

In this battle, warriors from nearby villages come together to fight so as to attract the attention of the women watching the fight. This battle signifies how strong they are as well as how long they can hold on during battles. One strange thing about the Donga fight is that, the violence encompassed within it is so huge that it does get bloody to the extent of some fighters losing their lives even though, killing an opponent isn't allowed.

Well, mistakes do happen. At this point, I'm convinced drinking the blood is very important to them. They need the maximum strength to compete in the Donga battle. 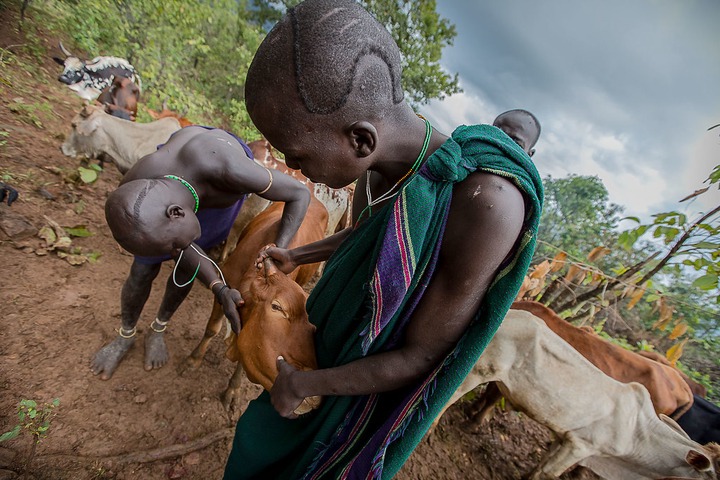 It is said that the household of the warriors who unfortunately lose their lives during the Donga fight are usually compensated with either a woman or cows while those who get injured are not cared for.

Some warriors fight naked to show their bravery in front of the women and upon winning, it is said that they can choose any local woman as a wife.