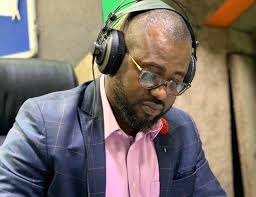 Abeiku Santana has come out we to reveal his support for the jailing of a young man who he claims he has advised several times. According to him, this young man was a childhood friend of his.

Abeiku Santana revealed while speaking on his radio show that, this childhood friend of his started stealing petty items like pens and pencils when they were in school.

According Abeiku Santana, the bad habit of stealing petty items has ended his friend in jail and he is currently serving over 12 years prison sentence. Abeiku indicated that, he is happy that, his friend is facing such a punishment because he will learn to desist from such bad habit after serving his sentence.

“When we were in school, I had a friend who engaged in petty theft like stealing pencils and pens. He got so much addicted to this behavior that, he could not stop and continued to steal from people even outside school. He has done this for several years and he is currently serving over 12 years in prison. As for that guy, he deserves to be in jail because I have warned him several times”, Abeiku Santana revealed.