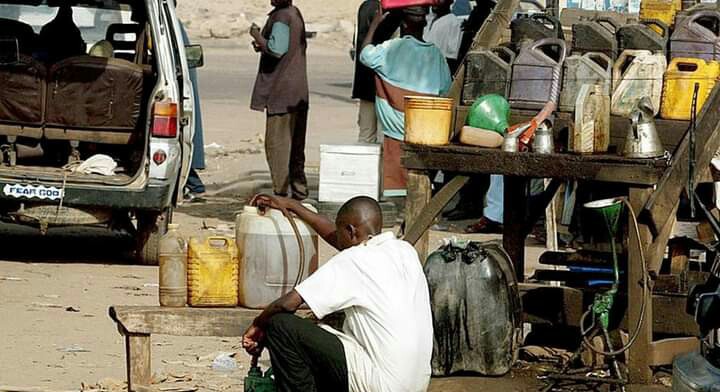 The instant justice in Ghana, continues to be a major problem for Ghanaians at large. Kwame Sefah has suffered instant justice at the hands of Konongo residents, after he was caught stealing fuel this morning. Konongo is a populous town known because of its twin town Odumasi, and it is the home of the Lawyer Maxwell Opoku ESQ. who is the Director of the Ghana School of Law. Konongo lies on the highway to Accra from Kumasi. It is both a residential and commercial town, because of the wild business life that goes on everyday.

Kwame Sefah is a taxi driver who drives from Konongo main station to Low-cost extension during the day, and loads to Akranteabesa during the night. He start works at five in the morning, and closes at ten in the evening. On a normal day where business is not doing well, he closes before the ten in the evening. And on serious days like market days, he closes at dawn sometimes. Tuesdays and Fridays are market days in Konongo, and Kwame Sefah closes at dawn on such occasions.

Workers at Akranteabesa Machinery and Mechanics (Fitamu), has been complaining about the missing of their fuel usually on market days. They loads their tanks on Monday evenings and uses the fuel to service their customers on Tuesday mornings, because of the market day. They have been checking the quantity of their fuel, and they keep going down at night every day, workers did not understand and bosses blamed their apprentices for stealing the fuel until this morning.

Kwame after closing from work on Wednesday dawn around one in the morning, sneaks into the Fitamu bay and stole enough quantity of fuel needed for his car. He has been doing this for almost three months now, and hasn't been caught until this morning. Kwame was able to steal the diesel needed for his car this dawn, and went away. Not knowing the container he used in stealing the diesel had leakages in it. The diesel kept staining the road until he placed it in his car boot, and went away.

Early morning workers at the Fitamu noticed the diesel tracks, and kept following it until they didn't see anything again. They followed it to where Kwame Sefah parked his car and loaded the diesel before starting his car engine, and that was where they were able to only trace the diesel to. They immediately notified their groups and sent message across, incase someone tries selling the diesel to others. Kwame did not hear the message circulating around, and went to the nearby mechanical joint to help him load the diesel into his car tank, with a bigger fuel.

They alerted Akranteabesa Fitamu mechanics, who went in their number, and couldn't wait for Kwame to tell his side. They started beating him as soon as they confirmed the leakage on the boot of Kwame's taxi. They gave him beatings that nobody could think of and nobody went to Kwame's aid, until he became weak. He was left to die when they sensed he was weak, but an aged man who was playing draughts, chartered a taxi and took him to the stewards hospital. Mother of Kwame Sefah, Maame Abena was at the hospital waiting for doctors report. Kwame was at the ICU of the hospital, where doctors were operating on his face, from the wounds inflicted on him. The case hasn't been officially reported to the Konongo police, and they refused to comment on it. The case which took place early in the morning, has since not been reported to the police at the time of posting the news.

Master Ofori who owns a fitting shop at the Akranteabesa Fitamu, disowned taking part in the beatings but ended up narrating how it all started. He was one of the eye witness who stood and watch whiles the workers gave instant justice, to Kwame Sefah. His body was full in blood and can't be shared, because of strict site rules. Hospital officials at Stewards hospital is said to have issued a medical report for the police, but none of Kwame's relatives accepted the report and has since not reported the incident.