He Lures and sacrifices school children to his gods, do you remember doctor beckley

This world is full of bad people with malicious intentions of acquiring wealth through whatsoever means possible without any form of compassion or pity.

Dr Sri Yogi Ram Beckley was a Ghanaian doctor and occultist who terrorized Accra and made it fearful than no other, in fact the mere sight of his calendar or mention of his name sent children running into the houses for fear of being kidnapped.

He lived in golf city in Accra and was said to have had a huge house with very high fence walls which made it impossible for passersby to see inside it nor could his captives escape his captivity.

In 1994 he was lured two school children to his residence in gulf city where he tied one of them to a tree and dragged one by the leg into one of his chambers. 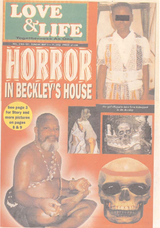 The one tied outside managed to break loose from the rope used in tying her to the tree and escaped and narrated what occurred to her parents who reported to the police, in no time doctor beckley’s house was full of angry mob who wanted to lynch him but the police arrived in time.

His house was full of mysterious amulets and talismans as well as uniforms of probably sacrificed school children, skulls and shoe maker’s boxes.

He was released after the police had found no proper evidence to imprison him , he reappeared in gbawe which is a community in Accra in the year 2002 and kidnapped 2 girls.

once again angry youths mobilized and searched his house thoroughly but could not find the two girls in fact the stench of blood and human excreter in his house made some loose interest in going further.

He was arraigned before a court and once again could not be sentenced but was fined an amount of 500 cedis which is equivalent to 5 million old curency.

He asked the government to compensate him for his loss since the angry mob destroyed by the angry youth who besieged his house in an attempt to save the kidnapped girls.

Slowly as time went on the name Ram beckly slow faded into the history books of Ghana with the doctor title finally gaining its dignity unlike spreading fear into the spines of children.