An alleged popular and notorious thief who goes by the name Yaw Okyere and mostly called Pazito as nick name really, He landed himself into trouble and was busted by the residents of Bibiani-Old town in the Western North Region. The 24 year old boy attempt to steal was not futile.

Pazito planed to steal a jack pot (gaming machine containing money). The machine is said to be loaded with GHS 200 coins. So He targeted to take it away but all ended unsuccessful. With reports Yaw Okyere was used as a scapegoat so He was given heavy beatings by the people of Bibiani-Old town to deter others because there have been rampant cases of stealing in the town. 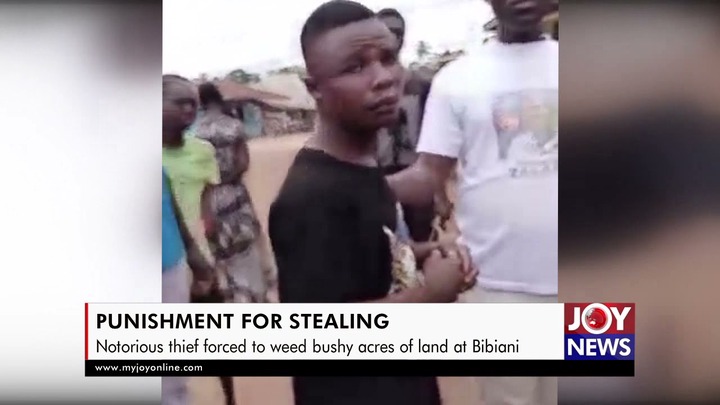 However, the life of this young man was spared and He was ordered to weed a vast acres of bushy lands around the community. The assemblyman for the area, Zakari Mubarik, who rescued the suspect from being lynched told Adom News that his reign seeks to eradicate the mindset of jungle justice. He added that a large acre was apportioned to the alleged thieve to weed, a punishment he has since undertaken. 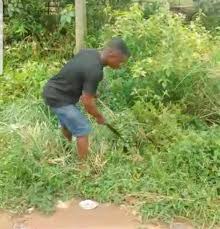 After He finished weeding under a scorching sun He rested and was served with a sumptuous meal.

Mr Mubarik, explaining the plan of such a decision said most crimes are caused by poverty or lack of jobs.

He concluded that rather than treating the suspects harshly, he said he has put it before some executives to implement the communal labour agenda for suspected thief's.

Link to watch moments Yaw Okyere was weeding below.