Indonesia: Woman Faints while being Flogged Publicly For Having Affair With Another Man Outside Her Marriage

By KwesiFaithful (self media writer) | 2 months ago

Married woman flogged together with her lover publicly in Indonesia for engaging in extramarital affair with another man outside her marriage. 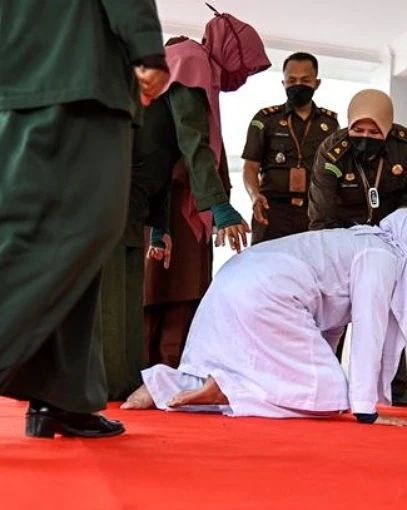 This is actually a punishment instituted in Banda, a city in Indonesia to curb the practice of adultery and fornication in the country. Despite the punishment made known to all citizens, some people still refuses to obey the rule, unfortunately for these lover, their secret sex life has been exposed and made example to all.

In the City of Banda Aceh, Indonesia province, Sharia law- which sees to rule governed by a radical interpretation of Islam's holy book, Quran. And this is the only city in Indonesia which practice this form of punishment. These lovers were lucky to get only 17 strokes but serious offenses can attract about 150 strokes from bamboo cane.

Reports indicates that victims usually pass out or get hospitalized after the punishment.

The victims(names disclose) from the city of Banda Aceh in Indonesia, were caught and had to undergo the punishment however, the married woman was sentenced to 17 strokes of canes but mysteriously fainted after receiving several strokes. Meanwhile, her lover had already received his and survived all 17 strokes.

The punishment was carried out by an official wearing a head-to-toe brown cloak with their identity obscured by mask. The married woman (victim) on the other hand could seen wearing traditional Islamic dress from the Photos attached to this article. They were flogged with a bamboo cane. 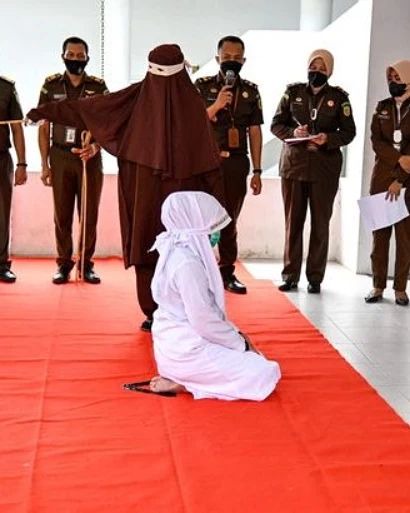 The photos show her slumping to the ground in agony while the punishment is being carried out. I think some of our African countries have to consider this type of punishment for such acts.