Five dead and eight in critical condition at Suhum Obretema

Five dead and eight in critical condition at Suhum Obretema

Eight people have been transported to the Koforidua hospital after a ghastly accident occurred yesterday evening, around five-thirty at Suhum Obretema. Obretema which is known as Suhum Obretema is a combined town of Suhum on the Accra Kumasi highways. The town is separated from Suhum by the Obretema River which lies in the middle of both towns. The driver of a Mercedes sprinter with registration number GW-7444-21 could not reach its destination in Kumasi when the car somersaulted and crashed near the Obretema river. The car which was coming from Accra had loaded to its capacity before setting off. The driver according to the survival pedestrians in the car, was going above his speed limit when they set off from Nsawam junction, but he was called back to his sense and the speed was reduced drastically.

Three passengers who were going for a program at Obretema did not know where the program was and was relying on the driver assistant who was sitting among the passengers, for direction. A mile to Obretema, was when the three made their intentions to stop at Obretema after countless efforts to reach the program coordinator, which didn't yield good results. They stopped at the Obretema curve, the main curve that leads to the Obretema and Suhum so the three passengers can get down.

The driver of the sprinter was about to set off, when the three stopped the car again that, the program coordinator had picked their calls, and the program wasn't at the Obretema curve but Suhum rather. Nobody apart from the three was going to stop at Suhum, and if it wasn't the three who got back into the car, the driver would have used the bypass road ahead. Just after the curve that leads to Obretema, was heavy traffic that had generated because of road construction. The driver used a bypass and was persistent to use the bypass to avoid the traffic until he reaches Suhum outskirts, with the narrow road he was using when the same three passengers alerted him of their final stop at Suhum.

The driver used the Obretema power bulk road to get back on the main road, where traffic was no more, and that was when he just lost controls and crashed. From the Obretema power bulk road to the main Acura to Suhum road, was when the driver sent something burning. They stopped and inspected the car but nothing was seen. The burning continued as they set off again, and they thought it was a rubber-burning or something coming from the bush since they didn't find anything on the car. Not knowing it was the front trees that were bringing that awful smell.

At 55km/p was when the driver heard his side tyres, which was the front driver tyres, bust into flames. The sprinter which was going 55km/p suddenly picked up speed when the tyres bust out and nothing was working again. The brake pedals had stopped working while the hand brakes weren't working either. The car somersaulted three times before it came to a stop on the Obretema main gutter which supplies excess water to the Obretema River. Four people died on the scene while an additional person died at the hospital this morning. It took over thirty minutes before ambulances were sent to the scene when both commercial and private drivers refused to take the injured victims into their car because of the ghastly nature of the accident.

Families of three people out of the deceased five have been communicated, while the two remaining bodies are yet to be identified because of their damaged body parts. The three people who were to stop at Suhum when the driver made a stop at the Obretema curve, were among the dead bodies that were recorded this morning. The driver survived the accident and is among the critically injured victims who are fighting for their lives. Surviving passengers praised the driver for the way he handled the accident, and if it wasn't for his tactical and experience driving, all of the 23 passengers in the car would have died. 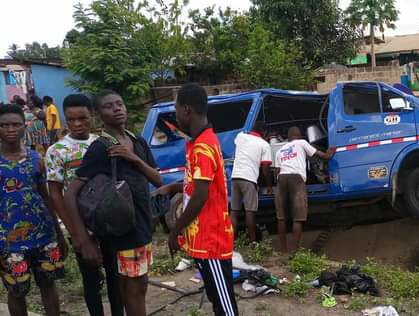