According to news circulating on social media, the Ghana police have detained 230 people at Kwame Nkrumah Circle who are suspected of being involved in illegal activities. 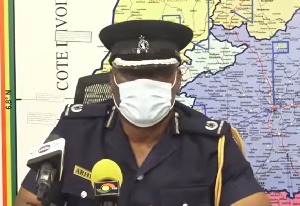 Ghanaians, Togolese, and Nigerians were among those detained. They are suspected of being involved in an armed robbery that happened a few days ago, according to sources. Soldier bar was the scene of the swoop.

According to ACP Arhin Akwasi Arhin, the director of national operations, they received a tip about illegal activities two weeks ago and began tracking them before the swoop.

"We received a warning or intelligence from some quarters two weeks ago that some criminals were engaging in illegal activity such as armed robbery, drug peddlers, and prostitution in an area called Soldier Bar around Circle. We've been watching their behaviors for the past two weeks.” He stated.

ACP Arhin said that in addition to the 230 suspects detained, 33 motorcycles were also taken, some of which were licensed and others which were not.

“A total of 230 suspects were apprehended, with 33 motorcycles, some of which were registered and others which were not. During a press conference about the operations, he said, "We suspect that some of these motorcycles are being used to commit crime."

"She Was Secretly Murdered By Someone", Mother Of Leticia Cry Out Over The Death Of Her Child