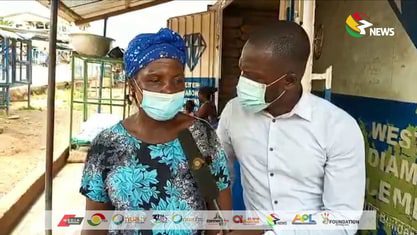 Mother of the supposed pregnant woman during a chat with Media General's Eric Yaw Adjei.

The announced arrest by the Ghana Police Service on Thursday, September 23 over the alleged kidnapping of supposed nine-month pregnant Josephine Panyin Mensah involved her husband and her mother, 3news.com has gathered.

Confirming the arrest to Media General‘s Eric Mawuena Egbeta in an interview on Thursday, Aide to the Western Region Minister Justice Acquah said Michael Simmons and his mother-in-law were picked up because there's suspicion of a staged kidnapping incident.

“Because it had been a syndicate. it had been strategically . One person cannot stage a kidnap. He had accomplice who helped in ensuring that they perform their ideas successfully.”

There are numerous twists and turns to the story following the situation of Madam Josephine Panyin Mensah at Tolanu, a suburb of Axim within the Western region of Ghana, on Tuesday, September 21.

Her miraculous disappearance after a dawn walk was officially reported to the police on Friday, Citizenship Day by her spouse forcing the police to issue an alert.

But when she was found, her pregnancy was no more.

The Western Region Minister, Honourable Kwabena Otchere Darko Mensah, had told Kumasi-based Kessben FM that his briefing from the National Security suggested that the woman was not pregnant.

This has, however, been challenged by the victims family and residents of Takoradi suburb Columbia, where the couple resides.