Driver to be fined after accident at Accra, Barnes Road

Driver to be fined after accident at Accra, Barnes Road

26-year old Awuni Charles, will be fined tomorrow morning, and will have to pay a heavy fine and sign a bond of good behaviour, for his accident this morning. Awuni who came to Accra from Taipei to start a new life, was abandoned when he couldn't locate his friends who invited him to Accra. He kept sleeping under bridges, begging for funds, until one Suleiman found him in November 2019. Suleiman who was an operator in collecting refuse dumps, introduced Awuni to the job in 2020, after Awuni showed interest in joining him for the job. They both wake up as early as five in the morning, and start tripping to community to community, taking refuse and sending them to the recycling centres. They have been operating from January 2020 to date, and has never gotten into problems. They take a minimum fee of 5cedis for refuse, depending on how big or enough the quantity was.

Awuni got a call this morning from Suleiman, of not feeling well and couldn't do it with him today. He instructed him to either allow the matter go, and wait till when he is ok to ride with him, or do it alone. Awuni anytime with Suleiman, takes the refuse wherever they go, whiles Suleiman drives the machine which is been used to receive the refuse. Awuni though has licence to drive the tricycle, but he hasn't driven it alone before, without the company of Suleiman. Awuni made pact with Suleiman that, he can take the loads alone today, without him and he should recover first. They parted ways, and Awuni went for the tricycle to begin the job.

He went through all their favorite locations, and collected the refuse himself, and drove the machine alone. He handled everything by himself this morning, and was on his way to the refuse recycling centre at Accra Central, near the state housing Headquarters. In front of the Workers College at Barnes Road Accra, was were Awuni couldn't focused on the road. He tripled his right side tyre and crashed the tricycle in the middle of the road. The busy roads which is used by high commissioners, ambassadors, and Osu residents for their daily operations, was stacked with difficult traffic all morning, because of Awuni's mistakes.

He accepted that, he overloaded the tricycle too much and that lead to the accident, when he lost balance. He will be arranged before the Accra Metro Town council tomorrow morning, where a fine and heavy sanctions will be administered to him for his mistakes that caused traffic on the road for more than five hours. The road was cleared when the town council directed a bigger track and seven workers to clear the rubbish into the bigger truck, before the tricycle was able to be towed away. Awuni will have to also sign a bond of good behavior on the road, before his license, will be returned back to him again. 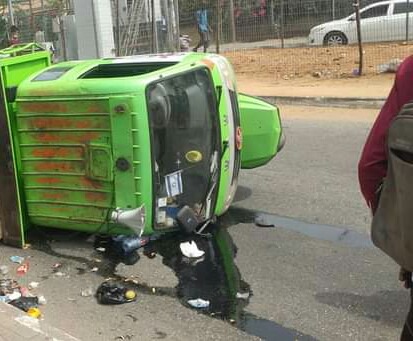 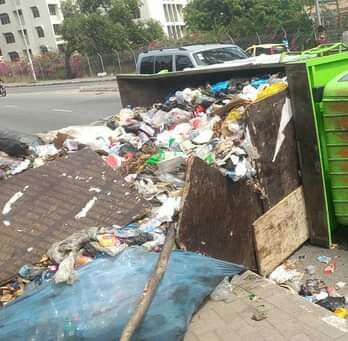