Nigerian Defies Orders To Pull Down On Waterway; Attacks NADMO Officer For Ordering Him 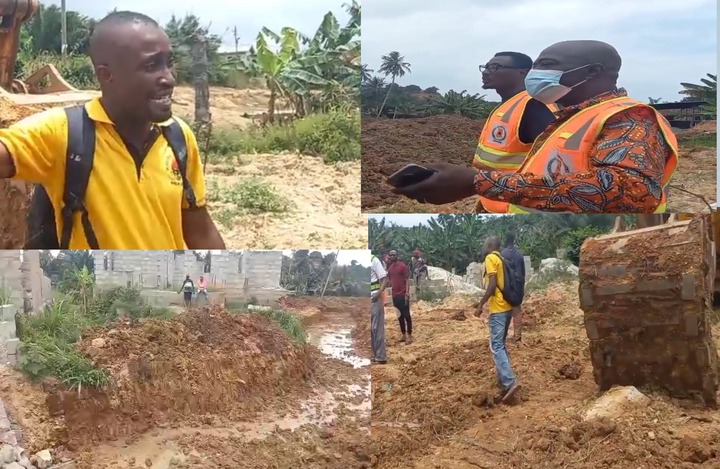 It is highly unprofessional to have a project supervisor defy the orders of an authority in getting a particular work done. In the Sekondi-Takoradi Metropolis, a contract has been awarded by the Regional Urban Roads Department to have some storm drains reconstructed and desilted but no city authority was made aware of the project.

The Metro Director for the National Disaster Management Organisation (NADMO), James Obeng Junior learning of this project undertook an inspection of one of the sites at Butumagyabu (BU) only to find out that an uncompleted building has been erected just about a meter from the course of the drain. He observed the operator of the excavator had altered the course of the drain to protect the structure.

He questioned why that was done and, in his response, the supervisor [a Nigerian] retorted they cannot act on his orders. The supervisor attacked the NADMO Director with insults saying they are lazy and had failed to stop the construction of that building.

He told the city authority that he cannot be ordered to pull down the structure and as such should he be confronted with that directive again he will stop the work. Mr. Obeng Junior felt the comment was distasteful. 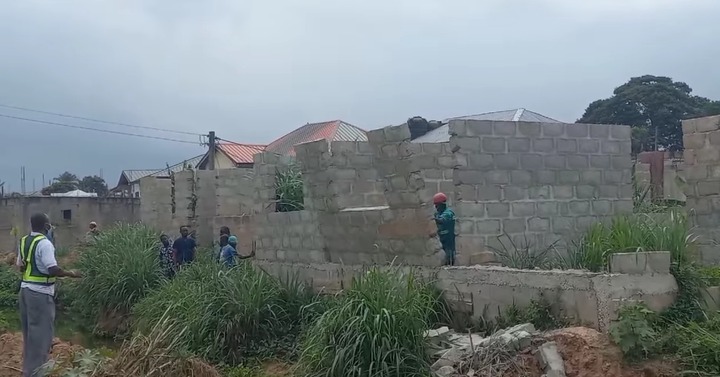 Uncompleted building being pulled down by hand

He managed to get his officers to use their hands to crush the walls of the building and later reported the incident to the Regional Director for Urban Roads about the conduct of the supervisor. Mr. Obeng demanded the local assembly be furnished with every single detail about the works being undertaken in the city by the ensuing week.

He shared with the media that the work that was being executed at BU was poor, and added that most of these contractors often partly perform their contract but take payment for the entire work by providing picture of the sections that have been duly completed. 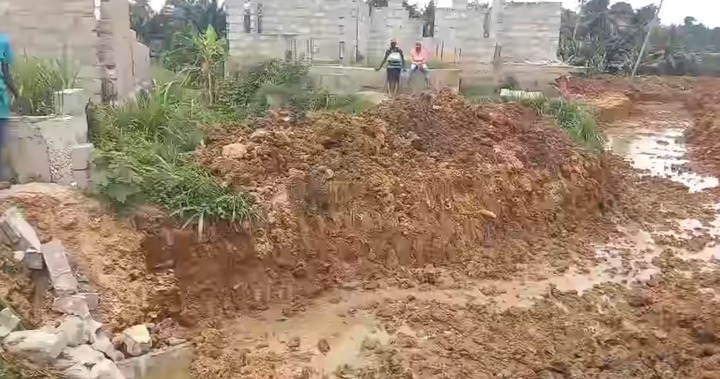 Mr. Obeng Junior stressed that the supervisory duty of the local assembly cannot be compromised given that the cost they incur as a result of a shoddy work is overwhelming. He reiterated that they will ensure that every contract is executed as per the scope so that value for money can be ensured.

He added that the era of fabricated evidence by contractors in the processing of the claims for payment will end with him. Mr. Obeng Junior added that his obligation is to ensure that lives and properties are protected from disasters, that he noted requires proactiveness and diligence in ensuring that every potential risk or threat is eliminated.

The Shake Up And Compliance To Bye Laws

The Sekondi-Takoradi Metropolitan has within its bye laws provisions that bar everyone from building on water ways. The city development engineers have been blamed several times for awarding permits for such development.

Following a series of review, the assembly resolved to demolish every single structure which threatens the natural course of water in the city. Several of these houses or structures have been marked for demolishing.

Others who had defied these orders have found themselves in the court, to face the beat.