By Kwofie-Fire (self meida writer) | 1 months 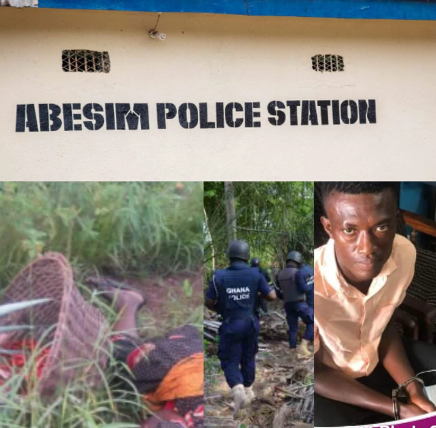 Killer Suspect Richard Appiah has landed in more trouble as fresh scary revelation drops about his alleged murder case. According to the details released from the police investigation and thorough interrogation on the case, it was confirmed that the suspect led the police to a coca farm near his residents and there were shocking discovery that was made today, Wednesday as organs of two children was retrieved by the police at Abesim near Sunyani in the Bono Region with their genitals missing.

However, the police discovered the organs of the children with part of their organs missing prior to the discovery and this whole discovery was made possible because of the information released by the alleged killer Richard Appiah during severe interrogation by the police.

Meanwhile, this revelation has definitely made the case of the suspected killer Richard Appian more difficult and this obviously means more trouble for the prime suspect (Richard Appiah) who is still in police custody. Amidst the police discovery of the two children organs, there has been countless rumors suggesting that there are atrocities committed by the alleged killer Richard Appiah which is yet to be discovered.

As at the time of this report, it was confirmed that the organs of these children has been taken to Accra hospital for autopsy test in order to determine what led to the children's death. Also, people in the neighborhood has been living in fear over series of revelation that has been made so far and many more that is yet to be made.

VIDEO: Don't Come Near Our Boyfriends; This Will Happen To You If You Try -Girls Warns 'Side Chicks'