Video: An armed robber robbed a man at gunpoint in broad daylight.

Armed robbers are becoming more dangerous by the day, and this video posted on Facebook by Nhyira FM this afternoon revealed just how ruthless they can be when stealing from innocent victims. In this video, a man is seen sitting in a plastic chair in a parking lot casually going through his phone, while another man stands on the side of the road waiting for someone. Suddenly, a man dressed in a black shirt, a nose mask, and a hat on his head appears from nowhere and pretended to meet the man who was standing on the side of the road. He walked past the man in the chair, but as he got close to the gentleman on the roadside, he made a quick turn and pulled a gun from his dress and approach the man in the chair. When he got close enough, he pointed the gun at the man and took his phone. When the man holding the mobile phone noticed the armed robber had a gun, he did not challenge him and simply handed the phone to him. When the armed robber turned to go, the man standing on the side of the road tried to confront him, but the robber pointed his gun at him, and he was unable to stop him. Once the armed robber arrived at the roadside, a man who was most likely his accomplice arrived on a motorcycle, and he sat on it, and the two of them made off with the phone. The entire incident took less than a minute and was captured on a surveillance camera mounted on a wall above the man's seat. The unfortunate thing is that the armed robber was hiding his face behind a nose mask which makes it difficult to identify his face but the good is that no one was killed in the process. 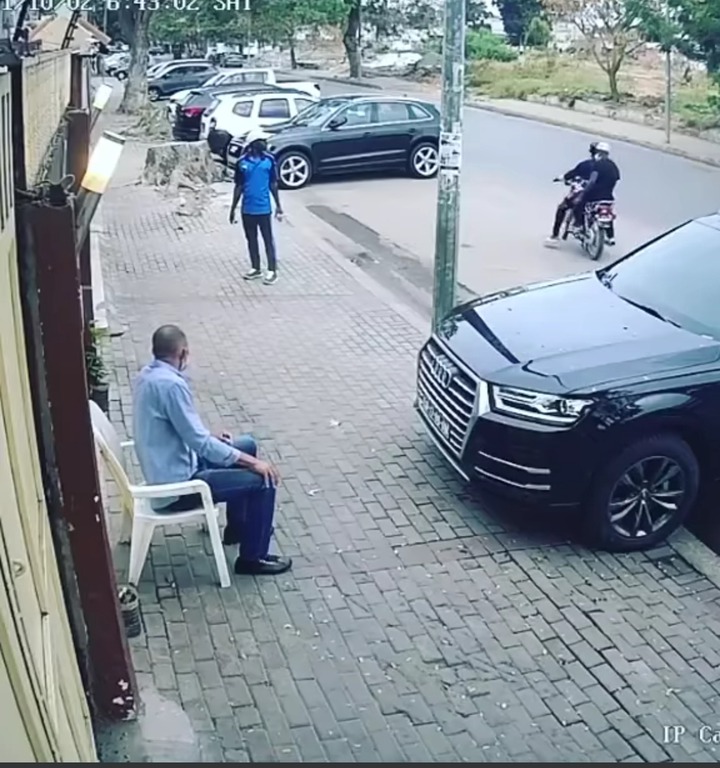