By JNTurkson (self meida writer) | 14 days

The government during its second term in administration has renewed the fight it started some few years ago to clamp down all illegal mining activities. Several equipments have been seized and destroyed (burnt) by the military taskforce deployed for the course. Many including chiefs etc. have shown their massive support to the government in its quest to halt all illegal mining operations.

Nobody would have thought it would go to the extent where the fight would be supported by traditional means. It is well known among Ghanaians that, people usually have some sense of fear when it comes to dealing with smaller gods. This might be because of something they have seen happen to a fellow when the spirit of the gods were invoked. 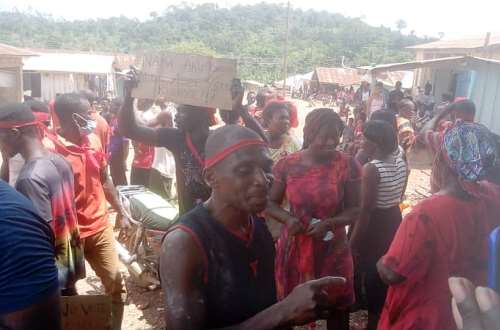 The leading chiefs within Sefwi Mmrewa in the Bibiani-Anhwiaso-Bekwai Municipality in the Western North Region have thus resorted to fighting illegal mining in their own little way. The leading chiefs and community inhabitants gathered around to perform some rituals with clamping down illegal mining activities in mind. The group also believes that this would help to protect the natural resources in the area; the forest reserves in Mmrewa, Nkronua and Manze and the river bodies in the area.

The chiefs invoked the spirits of the gods of the rivers and the land to deal with anyone who plans on destroying the region's forest reserves and water bodies through illegal mining. The ritual was carried out at Asuo Wurom.

According to reports monitored by Modern Ghana, this is what was said during the rituals,

"Those who are involved or behind illegal mining activities whether government officials, individuals in the area, politicians or whoever,the great gods of our river should deal with them".

The group led by the Chief Linguist of the town said that the forest is dear to their hearts and they would do everything in their power to protect it both physically and spiritually.

What do you make of the step taken by the chiefs? Will it in anyway prevent people from mining illegally in the area? Kindly leave below your comments. Thanks for reading the article.