Stepparents of today are said to be good because the ancient stepparents were really more than bad, they hated their stepchildren and treated them like slaves. A female stepparent did something that in fact I don't know what to say about it, let's get started with the main reason why we came here.

A boy was living with his stepmother after his biological father passed away. He was very smart and too kindhearted making some people to love him and others to hate him because they complained he wasn't strong because he don't like fighting at all.

His stepmother treated him very badly, she gives him money anytime she feels like and don't if she don't want to. She was rich but hardheaded. She normally accuse the boy for no reason and later come back to her senses.

One day, she complained that her only 20 cedis for the day is missing so the boy have stolen it. Meanwhile, the boy hasn't stolen her money before but nobody knows whether he really stoked it. She asked the boy and he denied almost crying.

She beat him mercilessly with a stick and took the petrol she use to fill her car and poured it on him. She then continued beating him and pushed him outside the house, the boy was pleading but it was to no avail, she then lighted a match stick and burnt him alive.

Instead of witnesses to pour water on the boy they were rather taking pictures, meanwhile he was screaming and burning. See him below: 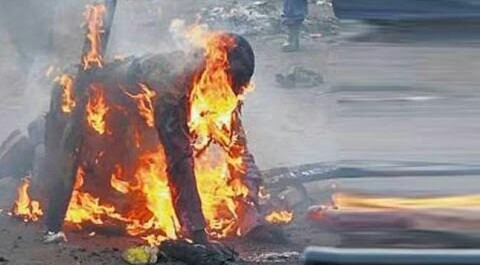 After she finished with her cruel and evil act, she sat in her car and drove away to where no one knows. The boy was no more moving but stack, he was burnt.

What do you think should be the punishment for the stepmother after she would be caught?

Content created and supplied by: lenaevans300 (via Opera News )