3 Dead, several others injured as trotro van runs into a cargo truck at Tesano

Very tragic indeed as three people have been confirmed dead with several others being rushed to the hospital as a commercial vehicle (trotro) crashes into a parked cargo truck on the Tesano road at around 4:00 am today.

The van, with a togolese licence plate containing onions apparently broke down in the middle of the road yesterday. Meanwhile, the driver of the cargo truck refused to put up any road signs that indicating that there was trouble up ahead.

According to Mr. Konadu, an eye witness who spoke with the media, the "trotro" driver didn't see the parked truck as there were no signs and clashed into it. Unfortunate for him and two other passengers, they lost their lives immediately.

Mr. Konadu further claimed that motor rider later on also fell for the trap and crashed his vehicle too. Lucky for him, he survived but was badly injured.

Since the vehicle was severely damaged, witnesses could do but little help and had to wait for the fire service to arrive. Using heavy machinery, they created a hole in the trunk and saved the victims.

Other law enforcement agencies later joined to help save the victims and also to clear the road of the upheld traffic. 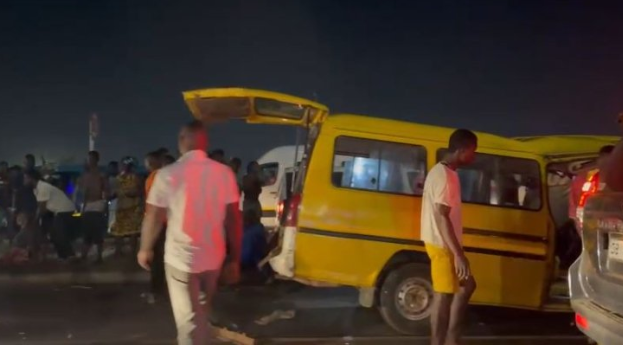 Content created and supplied by: Myfeed (via Opera News )