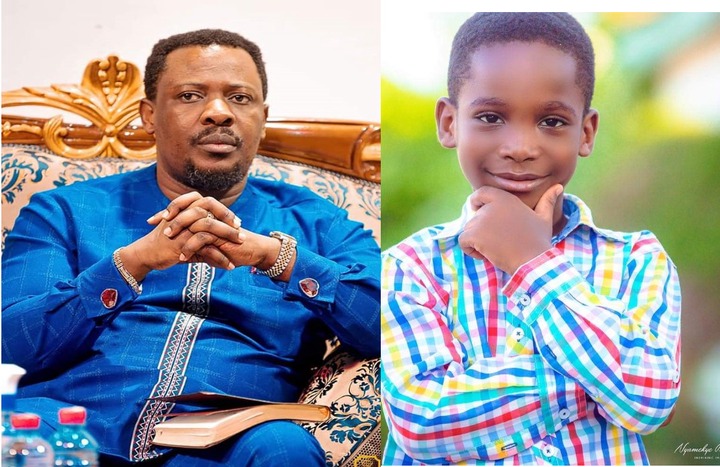 Prophet Nigel Gaisie has been harbouring some dangerous secrets about his family. He had kept it from the public despite the magnitude of the threat.

Until today, nobody perhaps might have known that his son, Nyameyekesi Kwabena Gaisie became a target for kidnappers. Nigel Gaisie shared with Captain Smart on Onua Television that there were several attempts on his life and family because of how outspoken and critical he was about the government.

He disclosed that some people were hired to kidnap his son in Ghana but for the caution, one of the plotters sounded to him, he flew the son abroad to escape the tragedy. Nigel Gaisie mentioned that his enemies had grown to an extent that his family’s lives were endangered.

He indicated that he had to act quickly and take his son to the UK to further his education and ultimately protect his life from the evil ones. According to him, there have been two robbery attempts on him even before the kidnap was hatched against his son.

Nigel Gaisie claimed to have audio recordings of those behind the attempted kidnapping but failed to mention who they were.

“One of those who plotted the kidnap came to tell me. He came with voice recordings. That is how serious the system is,” he said.

He insinuated that those behind these plots were persons who were offended by his criticisms. Nigel Gaisie argued that Prof Martey never got threatened during President John Dramani Mahama’s tenure for being overly critical against the government.

He lamented that the government of today is suppressing free speech and threatening pastors who speak the truth about people of authority.

“Prof Martey is walking freely. No one hurt him. John Mahama did not harm him. Who was so critical of President John Mahama than him?” he asked.

Nigel Gaisie recounted that he has been one of the few prophets in the country who have been vilified because they criticize the Akufo Addo government. He added that no amount of these threats would cause him to go contrary to what God instructs him to do.