340 Suspects In Police Grip In Kasoa.

By millanews360 (self media writer) | 7 months ago

The police rounded up 340 suspected criminals, including five females, in a dawn swoop at kasoa and its environs, in the Awutu Senya Municipality of the Central Region.

Dubbed ‘’Operation Storm Kasoa’’ the exercise, which was carried out by the Regional Police Command in collaboration with the Kasoa Divisional Police, in Kakoa CP, Adade, Akweley, Ofaakor and Buduburam, was to clamp down on criminal activities in the municipality. 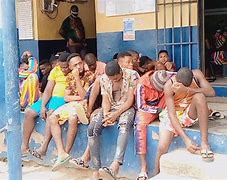 The suspects, aged between 19 and 39 years , including foreigners, were in police custody assisting in investigations. The Regional Police Commander, Deputy Commissioner of Police(DCOP)Habiba Twumasi- Sarpong, briefing journalists, here, said nine of my suspects were in possession of substance suspected to Indian hemp.

she stated that the police also retrieved 245 computer laptops and 142 mobile phones from the suspects. DCOP Twumasi-sarpong stated that the suspects would be screened and those found culpable would be put before the court, and that personnel of the Ghana Immigration Service have started profiling the foreigners for repatriation.

She gave assurance that the exercise would be sustained and called on the public to support the police in crime prevention.

Content created and supplied by: millanews360 (via Opera News )