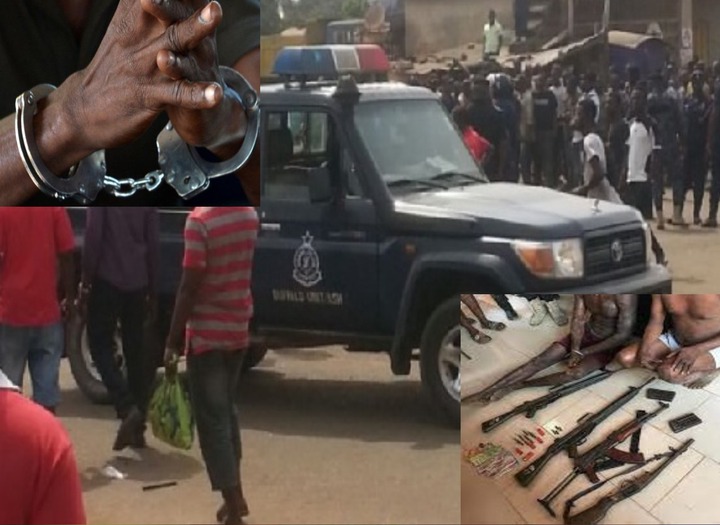 It has taken the police over nine (9) months to arrest suspects in the Gbane Mining site robbery which occurred on the 28 October 2020. These robbers bolted with some cash and other properties from miners at the site in Tongo in the Talensi District of the Upper East Region of Ghana. The arrest made at their hideouts in Obuasi mining community in Gbane was made possible through some intelligence gathering by the Police.

The suspects; 19-year-old Isaac Kolong, 22-year-old David Batame, and 32-year-old Aka were taken by an unexpected swoop in their hideouts. Weapons including BB cartridges, and a bayonet were retrieved from them.

According to the Police, these suspects had named their accomplices, and issued a warning to them to surrender at the nearest police station before they are ‘smoked out’.

Other Arrest Made In the Enclave

On July 12 this year, the Upper East Regional Command of the Ghana Police service made a similar arrest on three suspected robbers in a mining site heist. The intelligence as shared by the police indicated that these robbers whose name were given as Maxwell Ziaba, Bodozina Awudu, and Yidaana Shamshudeen, were involved in robberies in the Nabdam and Zebilla Districts.

Just as the latest arrest [as detailed above], they were also involved in other heist in Obuasi mining communities near Tongo and Gbane of the Talensi District. The record of crimes is so interconnected that the Police believed there were other gangs that need to be uncovered and arrested to stop these recurring robberies at these mining communities.

At the time of arrest on these suspects, the police retrieved a locally made pistol, three cartridges of ammunition, fie gold detectors and other items.

Counts of collapsed mining pits at Gbane community had been recorded in the past, with the most recent which occurred in June 2021 resulting in the deaths of about a dozen miners. All these victims were involved in small-scale mining in the area.

Despite these safety lapses in terms of the structural integrity of the underground pits, hundreds of youths in the area cannot resist the attempts of salvaging some precious minerals so they could earn a living.

An attempt by the local authority to close down these mines proved futile.

6 Signs of a good woman.

Its worth 1,500 dollars: lady told fans who questioned her dress price.