Unraveling the mystery of the Takoradi kidnapping story 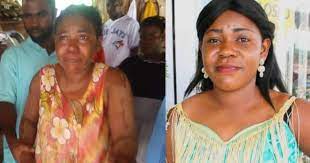 Strange occurrences continue to happen in Takoradi, one of Ghana's largest cities. With reports of constant disappearances, kidnappings and rituals in the city in the past 3 years, fear and panic continue to grip citizens of the city.

For this particular story, a 29 year old nine-month pregnant woman, Josephine Panyin Mensah went missing on 16th September, 2021. Speaking to Citi Breakfast news, the husband Michael Simmons, recounted that the wife went for a walk in the early hours of the said day and never returned.

The lady was found almost a week later near a Kingdom Hall building in Axim after an intense search party. Days before she was found, family members including the mother of the lady mentioned that she had received calls demanding for some undisclosed amounts of money in return for her daughter. The mother was even allowed to speak to the daughter who could be heard in the background crying.

The interesting aspect of the story is that after she was found and taken to the Axim government hospital, medical examination and investigation by National Intelligence Bureau proved that she was not pregnant. This report was echoed by the Western regional minister who said in a statement that the pregnancy was a hoax.

This declaration was met with mixed reactions by the public and particularly the family members who insisted that the lady was pregnant. Speaking to Citi News, the husband, Michael insisted that the wife was nine months pregnant and almost ready for delivery. His statement was further supported by other family members and neighbors of the couple. The mother of the lady also told reporters that unknown persons on a call told her that, her daughter was being returned because she could not be used for what was intended.

Currently, as at 23rd September, 2021, Josephine Panyin Mensah is receiving treatment at the hospital while police and other authorities continue their investigations.

However questions that continues to ponder on everyone's mind is:

Was she really pregnant?

If she was why did reports by authorities indicate otherwise?

Content created and supplied by: vim4 (via Opera News )