TALES FROM THE NORTH: Carrying Garawa, an Attainment of Womanhood

By Kumbundoo (self meida writer) | 5 days 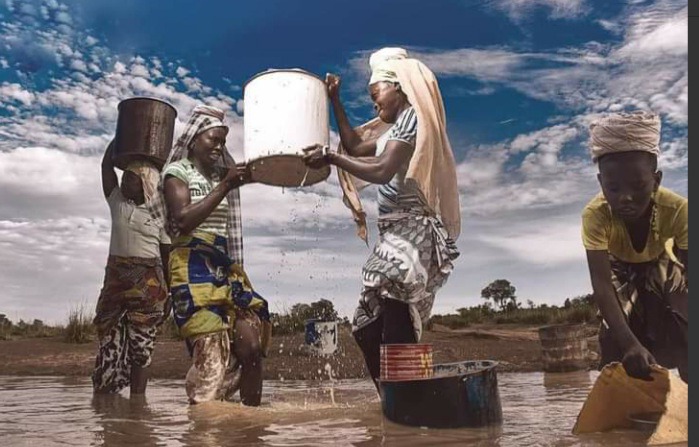 Among many responsibilities, Dangana was trained and prepared to play a significant role in keeping households and families in good shape. Her responsible parents paid a lot of attention to her development. There was a sense of pride raising a daughter who’d bring honour to her parents and family; so Dangana grew up learning a great deal of responsibility from her parents, especially, her mother and auntie.

As sons had their roles, so did daughters. Understudying their mothers in the kitchens, at the grinding mills/grindstones, in the farms picking Shea fruits and harvesting vegetables, in the wild hewing wood, at the streams and wells drawing water, etc, afforded our great sisters the opportunity to become the industrious women that our mothers were.

When a daughter was attaining womanhood hood, some signs were taken into account and notable among them was her ability to carry water in a locally made jar called Garawa. If she was not yet capable of carrying Garawa, then she wasn’t considered as being a woman yet (o na bi bi paɣa). Culturally, anyone who could not perform this task was not ready to marry, barring a marriage was arranged in exceptional situations. For most societies in Northern Ghana, a girl had to be physically ready and strong enough to be a “woman” before she could be married.

Dangana attained adolescence. Her face sparkled. Her chest had developed two huge ‘pimples’ that stood akimbo and invited every man’s stare. The beads around her waist needed to be increased in length because its host increased in width. Her long skirt (baatoro) needed to increase in size because its guest had protruded in size. Her voice became succulent and soothing. She became the cynosure at the popular Simpa and Tora events. Her name began to travel across lands and clans. However, she was yet to become a woman.

On the day Dangana was finally able to not only carry a Garawa filled to the brim but also able to lift it to her knee before being assisted to get it to the head, there was no need for the oracles to tell she was all but there. On the other day she was not only able to lift it to her knee but also bring it up to her head without help, she grew in pride and relished it. Her mother grew in pride as her father did. Her entire family was proud as the entire land did.

She’s now a woman; not just by name but one worth her salt. Young men from her land and across neighboring lands would dangle the tails between their laps hovering around her house, seeking to introduce themselves.

The overzealous ones would not hesitate to offer her father’s farm their labour. Chimbila would gather all his strength and incantations of his brave forebears to floor every strong lad at the wrestling square so he could win Dangana’s hand. Ablayi would carry a bundle of yam and a guinea fowl to her father on the eve of her grandfather’s funeral; just to win her hand. Wun-nam would empty his barn of groundnut to buy a six-battery cassette tape to win the battle for her hand. Yumzaa would buy the finest shirt (pabam), a white jeans and a white footwear (solaani) from Katiŋ Daa and “spoot” to Simpa; just to attract her. Yinmalya Ayelgum would return from working in people’s farms in the South (Saafa/Juaa) and buy a wooden furniture with pieces of rubber-covered cushions just to win her hand. Shaikh Kasi would do everything within his means to win her hand for Yooyili.

... and then, finally, Jamponi, Afa Marzuq and Prince Abu’s younger brother, who paid homage to her parents for long could not afford to lose her to the teeming strong men with their tricks, so with a few ancient words - “ŋmaligi mini o paɣa solɔɣu”, mbirim ba mini o paɣa n-deegi n bini”, the ancestors stood behind him. Elders sent cola nuts to her clan elders upon first visit. They sent another for second visit, and a beautiful wife was given. Young of the great land paraded bicycles on the fateful evening and by the time moonlight sounded louder than the chirping birds, the long ride brought Dangana home. On her first visit to the stream with other women who were eager to see what she would do with the Garawa, she lifted it to her knee and up to her head, without any support. Honour to her, her husband and her parents, all the more. Indeed, she became a woman.