He deserves a priceless award for this: How an Angel TV Reporter saved a 4-year-old chained child

A fearless Angel TV/FM Reporter has totally defeated the claims by the Assin Central MP (Hon. Kennedy Ohene Agyapong), "that Journalists are triggering war in Ghana".

No matter how risky the incident seemed in public eye, Eugene Osei used his intelligent and prudent Journalism skills calm it, to save the life of a chained toddler.

It is just marvelling how he handled that dangerous incident. However, reports have disclosed that some residents tiptoed, and secretly hinted him about what was happening in the community.

Residents of Ablekuma Odumasi have lived in intense fear and panic all this while even though they were willing to change the situation, for the betterment of the child and her helpless mother.

When Eugene heard the report, he waited until most of the community residents were away in that faithful Saturday. As we all know, Saturdays are for social events: Weddings, Funerals, Naming Ceremonies, Communal Labour, Farming activities, etc.

Therefore, he tiptoed, carefully observed the movements of the suspect, and entered the house without him knowing.

When he got there, he saw it with his own eyes that the 4-year-old child, was indeed chained like a dog, sitting in the compound.

What then will trigger a 4-year-old innocent child to be treated in this disheartening manner? The reports will subsequently unravel every detail. The reporter's narration disclosed that the child has been experiencing bed-wetting for a while now. Thus, each time she goes to bed, she bed-wets. And this, according to reports makes the father extremely furious.

Hence, to avert the child's behaviour, he decided to chain her like a dog. Not only that, he also puts the child in a sack occasionally, and puts her on road side, closer to a gutter, for the rains to beat her severely.

In his shallow mental wisdom, he thought he was teaching that innocent child, not knowing he was maltreating her, and causing himself a very great harm. 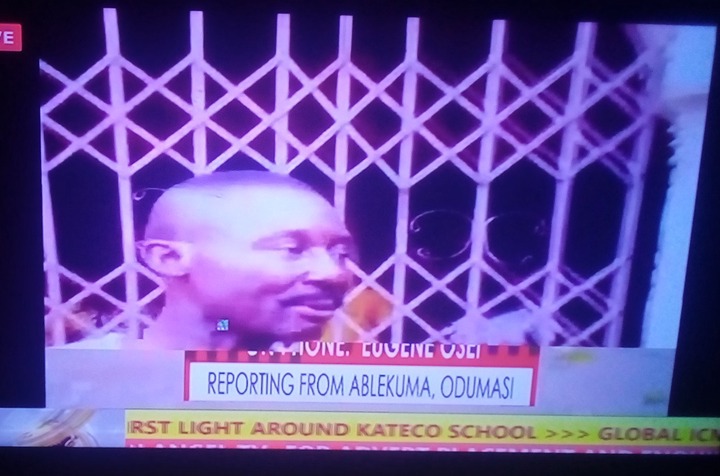 When the reporter tried to rescue the victim, the notorious and heartless father suddenly appeared and threatened to allow his dogs hurt him in a severe manner. In his compound, you could clearly see some wild dogs, surrounding where the child was sitting. This means that, anyone who makes an attempt to help or rescue the little girl would be devoured by them.

Reports are currently being made at the Police Station to arrest the suspect, and sanction him accordingly, to serve as a lesson to many parents in Ghana and beyond.

Kudos to this fearless Journalist. "Who knows? If not him, the child could have been chained to death."

In fact, he really deserves nothing but a priceless reward for this great work.