Someone Slashed My Forehead With A Machete; I Didn’t See Anything Again: Suhum- NPP Clash Victim 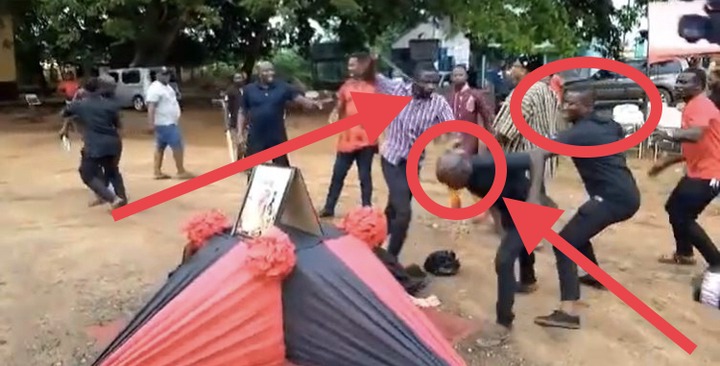 The recent heartbreaking photos that witnessed the disturbing photos over the clash of Alan Kyeremateng and Dr Bawumia at Suhum in the Eastern region has sparked massive stir, debates and arguments across all social media platforms after some supporters were involved in serious injuries.

Speaking on the most anticipated show on Adom Fm’s “Dwaso Nsem”, Bernard Amoani who was a victim of the unexpected incident took the privilege to narrate his sad ordeal as to how he nearly lost his life during the clash at the suhum funeral.

Bernard Amoani, who is a 54-year-old man highlighted that, he arrived at the funeral around 4:00 pm with a friend, Sammy Darko since he had to attend his in-law’s funeral at Ahwerase.

According to Bernard Amoani, who was slashed in the head during the funeral in the Suhum constituency of the Eastern region made it clear that, the funeral went in smoothly until the Suhum member of parliament, Boafo Kwadwo Asante arrived.

“I am a polling station organizer at Asamankese so as the order of the day had been, we decided to escort the MP to greet as party communicators but were stopped because they said they didn’t know us”, Mr Bernard Amoani emphatically stated.

“When the fight broke out, I cautioned them to stop since our opponents were present and could use it against us but my pleas fell on deaf ears. I was trying my best to ensure law and order when suddenly, someone slashed by forehead Machete. Though blood was oozing, I run after the car but the other mourners chased and got hold of me”, Mr Bernard Amoani emphatically added.

”I didn’t see anything again until I was rushed to the hospital. I was very broken and sad while I laid on the hospital bed because the MP did not even show up and I haven’t heard from him but Protozoa came there twice. If not for anything, the fact that I am a party supporter should have made the MP come around”, Mr Bernard Amoani sadly stated.

Do you think the clash between Alan and Bawumia supporters at Suhum over NPP can prevent the party from ‘breaking the 8’?

Big Butt Challenge: Check Out Thrilling Photos Of 3 Models Challenging Themselves With Their Big Ass