'Arrest Him!!!' - Residents calls for the arrest of a 22-year old man after seizing his tricycle 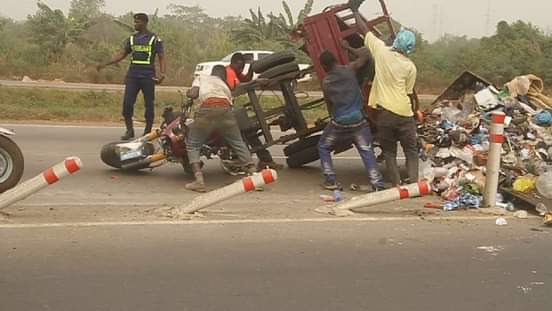 Residents of Dome Pillar 2 are calling for the Dome Kwabenya Police command to do due diligence and arrest the rider of a tricycle who was playing jokes on the road this morning. From Kwabenya to Dome Pillar 2 was when the rider Ofori did some gymnastics on the road at Dome Crossing with the load he was carrying. He was on his way to Achimota Golf course centre where the Refuse Recycle plant was, to offload the load he was carrying when a woman called him to come for some refuse at Dome Pillar 2.

Ofori instead of picking the call with his left hand so he can use his right hand in bending the curve at Dome Crossing, rather used his right hand in receiving the call whiles his left hand drove the tricycle, he is a right-hand man. He almost caused an accident when a taxi driver who was parked at the crossing wanted to join the road to pillar 2 from the taxi station. A caravan minibus had stopped to make way for the parked taxi to join the road from their station when Ofori who was still on the phone, overtook the caravan rather than stopping and waiting.

He was cautioned and the two drivers did nothing to him despite scratching their cars. The accident Ofori tried causing at the Crossing did not warn him as he continued playing on the road after taking the refuse load from the woman who called him at Pillar two. The same taxi Ofori tried crashing at the Crossing, was the same Taxi which was following him from Pillar 2 to Crossing, when the taxi was returning to the station after dropping his passengers at Pillar 2. Ofori repeated his gymnastics at another curve which ended in the tricycle crashing the road with all the loads of rubbish it was carrying.

The taxi driver who called the police on Ofori waited for the police to arrive before narrating what happened on the road. Residents were angry over the unnecessary traffic Ofori caused with his reckless accident and tried beating him but the police were there in time to stop them. The tricycle which was seized by the residents has been taken to the Dome Kwabenya Police command whiles Ga East refuse truck is on its way to clear the rubbish from the road. Ofori was with the police when they took him away. It was uncertain to know what crime he will be levelled against if he is been prosecuted. 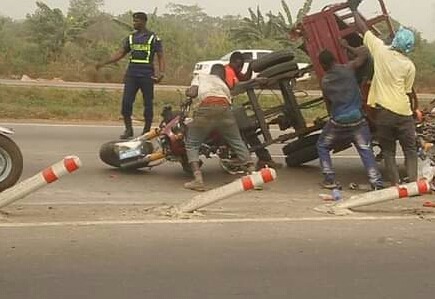 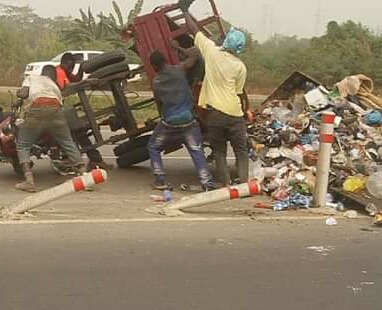 What could be the real reason behind Leticia's suicidal decision? Find out.

U/W: I never Applied to be MMDCE: 2020 Parliamentary Candidate

Why Do You Murder Her and Shame Her? The Guilty Will Never Have Peace.