By Kumbundoo (self media writer) | 28 days ago

Police in the Upper East Region have taken into custody a 22 - year - old Vulcanizer to assist with investigations following the discovery of military accoutrements in his possession. According to reports, the police acting on intelligence dispatched a Surveillance team from the regional police headquarters in Bolgatanga to Zebilla township to pick up the suspect whose name has been given as Amadu Abdul Kamal.

The Police say, a thorough search conducted in his room of the suspect led to the retrieval of one unlicensed foreign pistol Bruni Mode 92 cal, eleven live 9mm ammunition, a pair desert boot and some uniforms belonging to the Army and the Ghana Immigration Service. 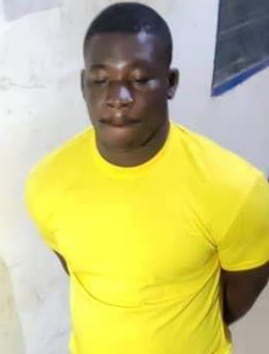 It is unclear what those items found on the suspect are used for but if he is to be arraigned before court, he could be charged with unlawful possession of firearms. Police in the Upper East area months ago launched an operation to stop violent crimes such as armed robbery and motorbike snatching which is very prevalent in the area. The arrest of Kamal and the retrieval of the firearms from him will be seen as a step towards ridding the region of crimes.