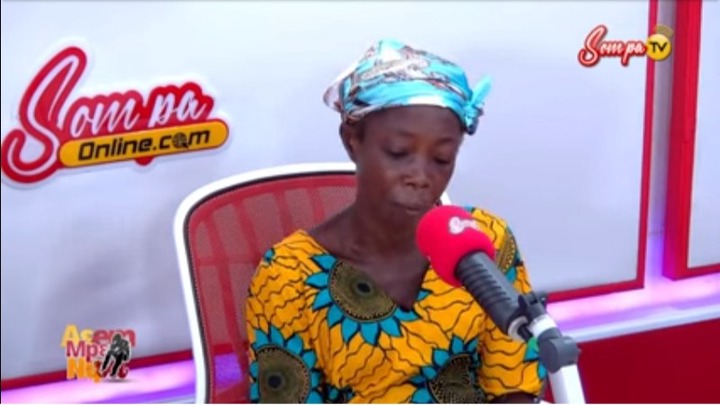 A mother named Ama Osaa from Nweneso in the Ashanti region shares what happened after her son called Botey was involved in a fight at a party. In the woman's narration, a man called Agya Osei who owns a shop at their neighbourhood organised a party one night, her son who is also a good dancer went to have fun at that party.

After Botey beautifully displayed his dancing skills, his friend known as Disway fought with him and and allegedly used scissors to stabbed his hand and tear the clothes he was wearing into pieces. The woman says her son came home to inform her about what has happened, she even advised him to have patience and also not to take any action but the young man didn't listen to her, he took a cutlass and went to destroy Disway's motorcycle.

The following day, Agya Osei threatened to arrest them because those young boys made his party come to an end without getting back the money he used to organise it. He then told them that he spent GHC9,000 on buying drinks, preparation of food and the machines he hired. They pleaded with him with some elders still, he insisted on taking the money from each of the boys.

They concluded to pay GHC5,000 and each of them will pay GHC2,500 each. The woman said she went for a loan to pay her shares of the debt but when he went to Disway's parents house, they told her that they will never pay any money to Agya Osei. Ama Osaa reveals that when Agya Osei requested the money, she explained to about how Disway's parents don't want to pay their share.

But the man told her to either pay all the amount or he will arrest them all. Ama claims she couldn't get that amount, few days later Disway too filed a report against her son for destroying his motor. Whilst Agya Osei wants to arrest her because she was not able to pay the amount of money he requested from them.