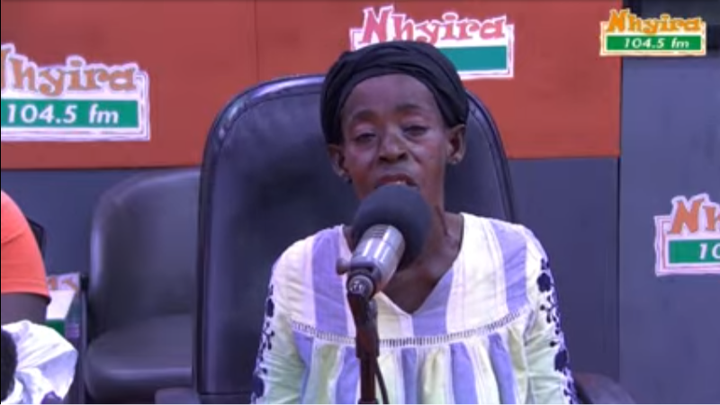 Adisa Dauda is a 50-year-old from Agona-Wiamoase opened up on what happened after her son went for money rituals. In the woman's statement, Seth who is 23 years old is her last born, he has trading at the market and earns enough money from his business. One day Seth informed her that he is going to look for additional money and add it to the one he has been using to trade.

Two weeks later, her son came back home but there was a change in his behaviour. The following morning the young man started shaking the wooden structure they have been staying in all these years. He again used a pick axe to demolish the whole house. Adisa said they were all surprised about how the young man was behaving, the next morning too, he brought out all their clothes and burnt them all.

The mother added that they were left with nothing, it was their neighbour who offered them a place to stay. That night he bagged into the room holding a cutlass and allegedly hits her with the cutlass and she started bleeding. The woman said she was rushed to the hospital for treatment, she spent two weeks at the hospital before she was discharged. Adisa added that her son continued to chase them with a cutlass whenever they tried to go to the house.

They couldn't endure his behaviour so they sent him to a pastor for help but when he came back home, the young man again harm woman staying in the neighbourhood, they have gone for a loan to pay for the neighbour's hospital bills. The woman states that she sent her son to different fetish priests and churches yet Seth has never let them have peace in the house.

Adisa recounts that the young man removed all his clothes claiming that he feels a burning sensation all over his body whenever he put on clothes. According to Adisa her son used to smoke and take drugs but she never thought that it can lead to that. The mother again said one of Seth's friends revealed to them that they went for money rituals but it was not successful.

The friend again said Seth was supposed to kill his sister for the rituals but he didn't get the courage to do it and he ended up like that. Seth's friend led them to the fetish priest who did the money rituals for them but he too couldn't do anything about his condition. Yaa Pokua who is the woman's first child also reveals that she has spent all the money she was supposed to use and establish her own business to seek for treatment her brother yet there is no improvement in his condition.