By Whatsap (self media writer) | 1 year ago The New Patriotic Party did not give him a penny for that viral song that I made for the party. Kwabena Kwabena revealed in a recent interview.

"For nobody else in the party the song was sponsored, I did this out of love for Nana Akuffo-Addo, who was the flag-bearer.

"Even though I wasn't expecting anything, we still have gratitude from God who made His word. That's why He expects us to worship Him every time." He told Nana Aba on the Star Chat Show.

According to A-Plus, he followed kwabena Kwabena tk Finance Minister Ken Ofori-Atta who dashed him over GHC 4500.

He added that Kwabena Kwabena accrues over GHC 100,000 from the song as well as other benefits.A plus has advised Kwabena Kwabena to stop being ungrateful and appreciate what the party gave to him as his work. 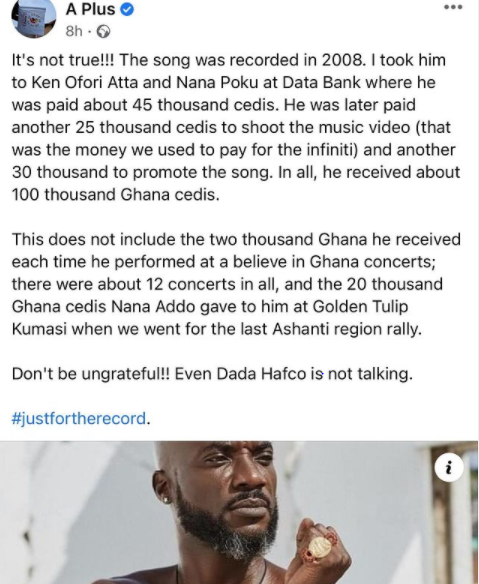 Who is telling the truth? Follow this page for more updates on the stories between A-Plus and Kwabena Kwabena.Please don't forget to like and share.Thank you.