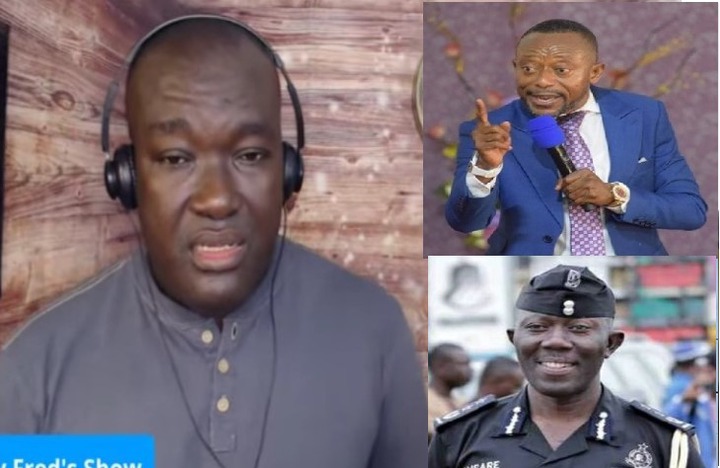 It is alleged that some nude pictures of Rev. Owusu Bempah were taken while he was in police cells. According to Daddy Fred of the Announcer Newspaper, the pictures have been circulating on social media and thus caused an embarrassment for the respected man of God.

He indicated that there was no way a civilian could have taken those pictures adding that the police officers on duty at the station where Rev. Owusu Bempah was detained are to be held responsible for these indecent photos. Daddy Fred asked that the Inspector-General of Police causes an investigation into the matter and discipline his officers for disgracing Rev. Owusu Bempah.

He elaborated that the pictures showed the respected man of God in just his underwear while he was being ‘dragged into the police cells. Daddy Fred lamented that the humiliation that was visited on Rev. Owusu Bempah must not go unpunished, adding that some dignity could have been accorded him at least for who he is.

Speaking in an editorial session on his platform, Daddy Fred demanded that the police identify and penalizes whoever took those photos on social media so that it could be a lesson to other officers.

“…to discredit and disgrace him like that is unacceptable. Who did that? Why did they disgrace the man? IGP must investigate this.

“I don’t know how that picture came out. Whoever took those pictures should be penalized. This calls for investigation,” he exclaimed.

Daddy Fred noted that the police have been very notorious about disgracing public figures who for some reason get into their custody. He mentioned that such behaviors are shameful and dishonorable to the Police Service.

“It is someone’s privacy. Why would they do that? We must be careful with this,” he noted.

He noted that the fact that Rev. Owusu Bempah is in confinement doesn’t mean his rights must be curtailed. Daddy Fred stressed that the IGP whom Ghanaians have trusted to be principled must act on this as soon as possible.