By JamalMoredie (self media writer) | 11 months ago

January 23, 1957: 24-year-old Willie Edwards,Jr is murdered by members of the Alabama Ku Klux Klan. He is buried at New Pleasant Valley Cemetery in Letohatchee, Alabama.

His KNOWN MURDERERS have NEVER BEEN CONVICTED.

Edwards was kidnapped & beaten by Klansmen in a car as they drove him around the city. Then they stopped at a bridge along the Alabama River and pointed a gun at Edwards, before commanding him to jump off the bridge. He fell 125 feet to his death.

Three months passed before his body was discovered washed up on the shores of the river. Officials stated that decomposition made it impossible to determine the cause of his death.

NIGHT BEFORE THE MURDER:

On the night of January 22, 1957, a small group of Klansmen gathered, armed with pistols and a rifle. They got into a car to look for Willie Edwards, Jr. who was recently hired as a driver for Winn-Dixie. Willie had come home from work and an hour later got a call from his boss asking to come back in because one of the other workers had called in sick. As they sat in the car they saw Edwards show up to work thinking that he was the Black man that had been sleeping with a white woman. Edwards left to go to work on the afternoon of January 23, never to return home.

In 1976, then State Attorney General Bill Baxley re-opened the Edwards case. Four people were arrested and charged with Edward's murder: Sonny Kyle Livingston Jr. (38), Henry Alexander (46), James York (73), and Raymond Britt, Jr. Britt broke the long silence with his sworn affidavit (in exchange for immunity), dated February 20, 1976. In the statement to Attorney General Bill Baxley, Britt described how on the night of January 23, 1957, he along with three other men beat and forced Edwards to jump off the Tyler-Goodwin Bridge into the Alabama River. Edwards fell 125 feet, from the bridge into the Alabama River below.

Alabama Judge Frank Embry dismissed the charges, even with Britt's sworn testimony because no cause of death was ever established. He concluded that "merely forcing a person to jump from a bridge does not naturally and probably lead to the death of such person." 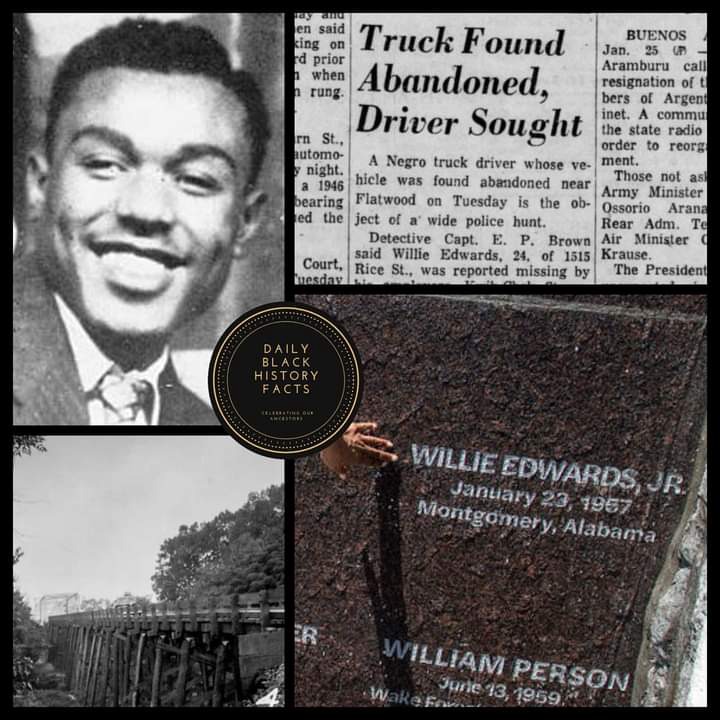 In 1997, Edwards' daughter, Malinda, requested the District Attorney, Ellen Brooks, to re-investigate her father's death. The District Attorney agreed and began working with the new medical examiner, Dr. James Lauridson. It was found that Edwards' death was caused by a forced jump into the Alabama River in 1957. Therefore, Edwards' cause of death was changed from unknown to homicide.

In 1999, the District Attorney presented the new case before a Montgomery County Grand Jury, which subsequently declined to indict anybody of a crime.

Don't forget to like the article after reading. Thank you.

Content created and supplied by: JamalMoredie (via Opera News )