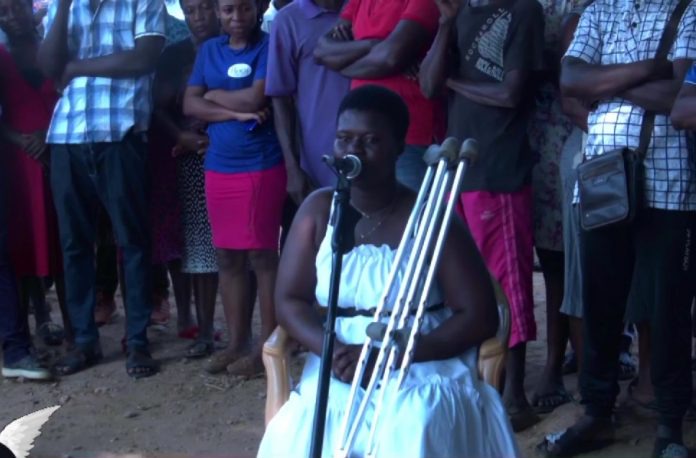 Ruth Mankata, a victim of the clash in Odumase Krobo in the Eastern Region in 2019, said her life came to a halt when she lost a limb to a stray bullet.

Ruth's dream has been to train as a nurse to help people with their health needs or as a journalist, but she is skeptical that those dreams will come true.

The young girl was shot in the right leg during a clash between irate youth from the Lower Manya Krobo and Yilo Krobo municipalities on the one hand and Ghana Police Service personnel on the other.

The conflict was sparked when the Power Distribution Company (PDS) conducted a mass power disconnection exercise in the region under police protection.

The residents of the affected communities' resistance and rage sparked a scuffle that resulted in the police discharging their weapons, of which Ruth Manka was a victim.

She is one of 11 people who have suffered varying degrees of injuries as a result of the disturbance that killed two people.

She said the incident happened while she was on her way to get groceries on Angel FM's Anpa Bfo morning show on Friday, during the production team's interaction with residents of Lower Manya Krobo and Yilo Krobo Municipality.

"I was on my way to the market and I saw people running." So I decided to run as well, and then I was shot. "

Ruth, who had her affected leg amputated, said she is struggling to adapt to her current situation because she was not born with a disability.

"I have to wait for my siblings to help me with household chores."

When asked what authorities had done to help her so far, the victim stated that after the government provided her with a refrigerator, nothing else had been done, despite several attempts to get the authorities to act.

As a result, she is pleading with the government to listen to her plea and assist her in realizing her dreams.