I was afraid to speak out witness to Kaaka's murder reveals

By generalconcept1 (self meida writer) | 18 days 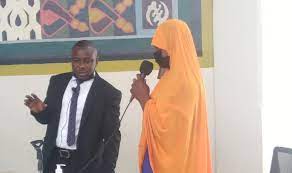 Sardia Fuseini, a farmer and neighbor of the social media activist, Ibrahim Mohammed Kaaka who was allegedly murdered by his brother has revealed she was afraid to tell what she witnessed on the night Kaaka was attacked.

She has so far been accorded as an acclaimed witness to the death of Kaaka.

According to her the index of her gender and the fact that her husband was away contributed to her fear and reluctance to speak out initially.

She also said, “because Baaba Iddi is the brother of Kaaka, I was afraid to mention it to anybody. That was why I was reluctant.

“I was just praying that Kaaka will recover and then will say it himself that it was his brother who did that to him.”

“We went to the police station and reported the matter.”

She narrated to the committee of inquiry how things unfolded that dawn.

“On that Friday night I was in the room performing ablution to offer my prayers. I heard the sound of Kaaka’s motorbike coming towards the house. Suddenly I heard a bang, I thought that it was the motorbike which had fallen down. I stopped whatever I was doing and relaxed to observe what was going on.

“Suddenly I heard somebody groaning. I came out to see whatever it is. When I came out I saw Kaaka’s brother holding his hand and pulling him towards the bathroom. At that place, there was light but suddenly the light went off.”

“I went to knock at the door of Kaaka’s wife to come out.

“I have a friend who is also a neighbor in the house, when she heard me shouting and calling and knocking at Sahada’s (Kaaka’s wife) door and calling her, she also came out. When she was coming, she met Baaba Iddi on her way”, she recounted.

She revealed she has been forced to relocate after giving out her statement to the police.

“Because of the incident we can no longer get closer to our house”, she disclosed.