Man Hangs himself in a Mosque at Lapaz

By Newsworld-wide (self media writer) | 9 months ago A Young Unknown man Hangs himself in a mosque at Lapaz. In the Pocket of the young man was found a picture of note written and in it was written, “No one is making me kill myself , I want to kill myself", and also in he piece of Note was his Dad's number who is in Niger. And beneath the number was written, “If I die my body should be taken to he Niger embassy" that's where his Dad works.

I the script lied his brother's number, when his brother came and saw his brother he was shocked and made a comment about he not having any idea about what had happened if he did he could have prevented that. He concluded by saying they were both students in Ghana, that was their purpose for moving here and although times are hard, They're doing well. 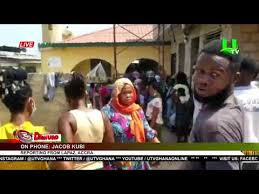 The body of the young man was found Thursday, 15th April, 2020 hanging in the mosque around 10:00am by the mosque overseer, A Waakye seller. She was in shocked since they didn't know the origin of the young man. She told UTV news about how she found the body. The police was called and they came along with the CID for investigations.

Content created and supplied by: Newsworld-wide (via Opera News )