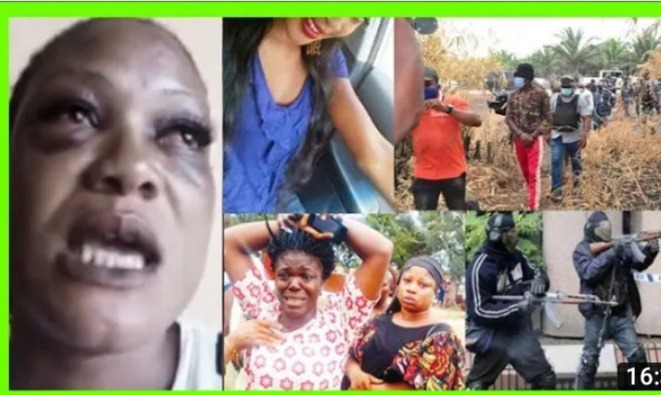 A lady named Enecha Ronard narrates how she was stripped naked and watched them kill other victims. Her bestfriend died last month in Nigeria so she decided to go her funeral but was not having money. The friend was buried on Friday but she was not able to go to her burial service, she decided to go to the memorial service on Sunday.

Eneka took a night bus on Saturday from Mazamaza and dropped at Eneka but was told that her that it was late, so she took another car on the road side, in that car there was five women and three men in the car. On the way one guy pull out a handkerchief, used it to cover her mouth and she did not see anything again. She woke up to find out that her legs and hands were tied together.

Eneka started shouting for help but one guy told her to stop shouting because they were in a forest, then he slapped her, six men came and started beating her, searched her bag, took away her phone, her ATM card and stripped her naked, Eneka started pleading with them and they told her to start calling her relatives, they snapped her pictures and started sharing the pictures to her relatives through WhatsApp. Sunday evening, one man told her relatives are complying with them.

They were some other victims too in the forest, the kidnappers called one man called Alhaji and told him that they have gotten someone and asked how much he will pay for it, Alhaji told them that he needs her eyes and breast. They told Alhaji to pay 4million and they bargain up to 3 million, after some hours they took one lady and cut her head in front of Eneka and they killed another lady again. On Monday morning the kidnappers killed another woman and they told Eneka that her sister have called so she should speak to her. She told her sister that if they don't come to rescue her, she will die.

Her sister assured her that they will come and rescue her. Later she was told to put on her clothes and called for a car to pick her, when they got to a main road and they pushed her away. The kidnappers drove off and at the roadside nobody was willing to talk to her because of how she was looking. Later one guy asked her where she was going, she told her situation. That guy took her to his house, they gave her water to bath and food to eat, luckily she was having one of her sim so she called her sister who came to pick her home.