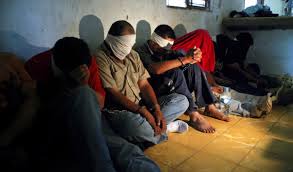 It has become a menace at the rate of how people are getting missing each day. Many have wondered who is behind all these recent missing of person but none has been apprehended as of now. It was with this discussion that was going on, that made one man share his experience of what happens to be a broad day kidnapping if he wasn't careful. Kofi Nelson is a young man who lives at Ashiaman in the Ashiaman municipal of the Tema Metropolitan Assembly. Kofi Nelson who is commonly known as KN among his friends, was transporting some goods when he came into contact with a kidnapper. KN was about to leave Ashiaman to Achimota where he was coming to repair his television set when a friend called him to wait for her. The friend also had a damaged TV set which she wanted to repair too, and since KN was going to the TV shop, the friend wanted to give him her television set so he can also repair the cracked screen for her.

KN had just arrived from a tricycle and was waiting for the friend at the Ashiaman overhead bridge when a 2021 registered Mercedes Benz G-Wagon pulled in front of him. KN who barely knew anyone at the Ashiaman Overhead bridge area, didn't imagine the car had just pulled there for him but thought he was looking for a space to park. The car honked its horn the second time and got the attention of KN. He was surprised as to how such a nice car will pull in front of him and demand his audience. The unknown driver of the G-Wagon Benz invited KN inside his car so he could give him a lift to wherever he was going.

KN who is naturally not a stammer started stammering and struggling to express himself as the car stood there waiting for him to get inside. KN felt he was under some kind of spell which had compelled him go inside the car but forces around him, was able to stop him from getting inside the car. It was his lucky day as his maker delivered him from the hands of the wicked. The unknown driver after spending over five minutes and not been successful with getting KN to enter his car, drove off at tough speed and that was when KN came back to his normal self again. KN took to share his experience, so many other people will note and know-how these kidnappers operate these days. They might have used his head for rituals if they had been successful in getting him into the car, and if he was the greedy type or the hyper kind of person, he would have been missing by now.

Most people may fall prey to these kinds of things because of the rich nature these kidnappers move and operate these days. They will force you to do what you don't want to do because you are under some kind of spell or influence, which is controlled by them. KN's experience at the Ashiaman overhead might be the same approach these kidnappers are using to kidnapped old men and women who are going missing mysteriously. 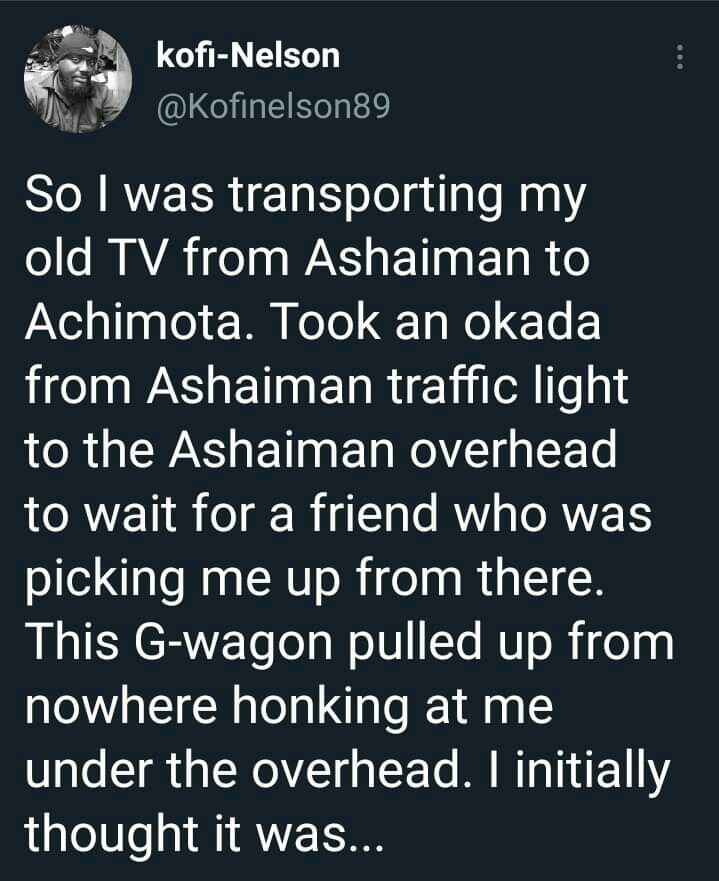 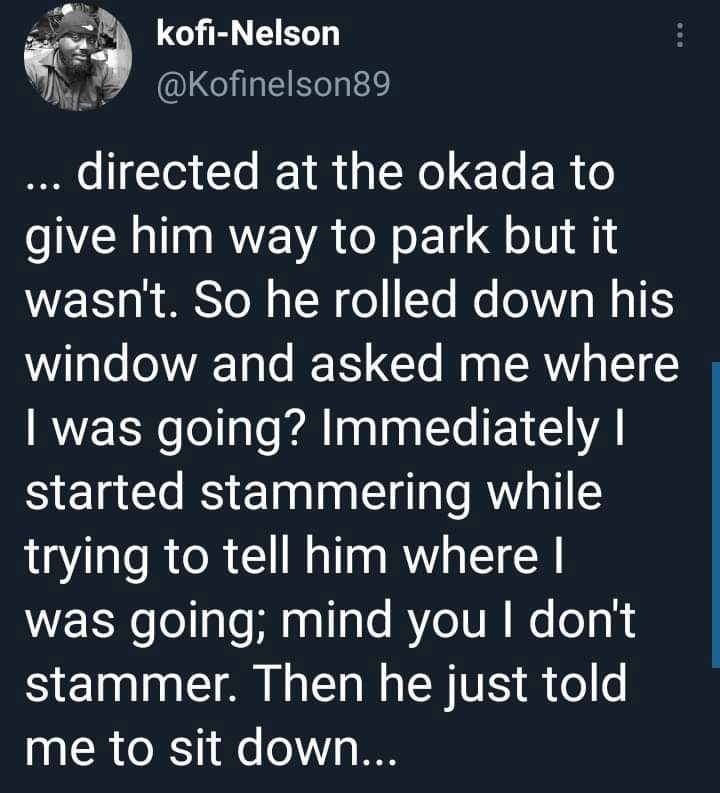 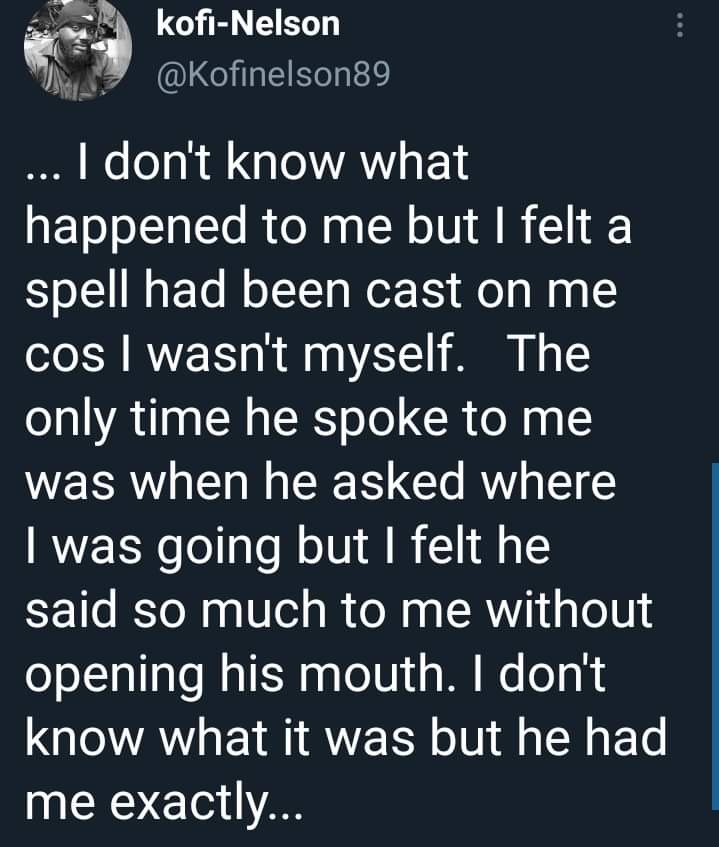 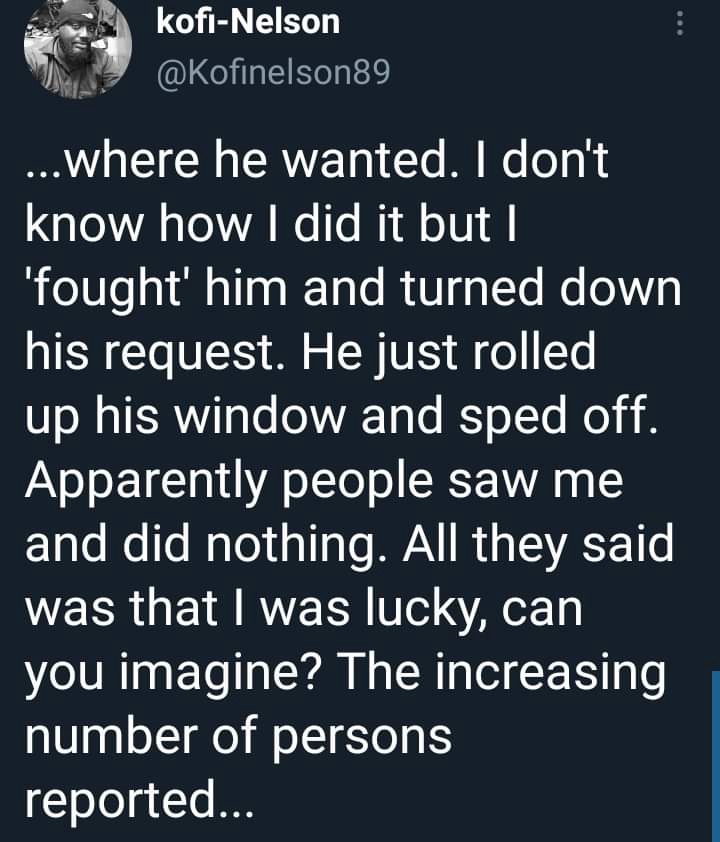 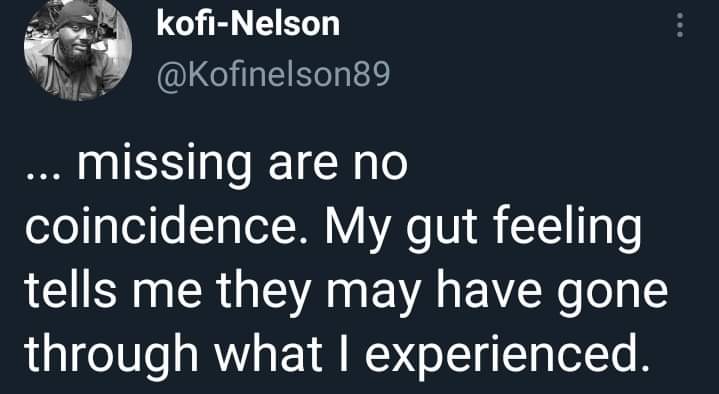