Police officer on reinforcement duties stoned, stabbed with a bottle 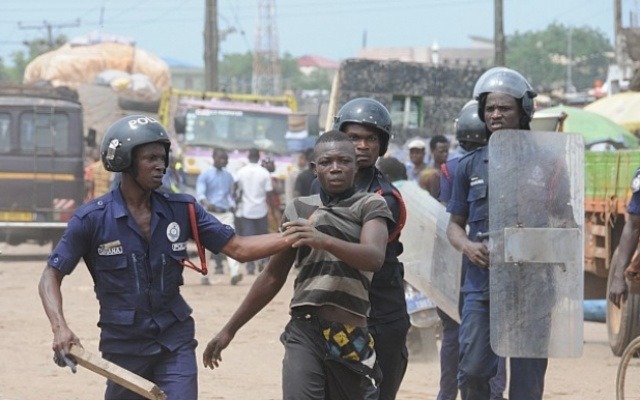 Police Constable situated at Gomoa Dominase as District Command is in critical condition after some persons attempted to lynch him.

According to Adom News when Confirming the regrettable incident, the Police Commander of Dominase, DSP David Osei Fofie revealed that Dominase police had a distress call from Gomoa Amoanda that a motor snatcher was a target of mob attack and they call for police assistance.

A police team, including the Constable, were deployed to the scene to restore calm, but the infuriated youth transferred their anger to them, throwing stones, beer bottles in the process to fight the police.

"When my people get to the scene to rescue the victim, the youth started stoning the security service including bottles."Said the police.

DSP Osei Fofie said the Constable collapsed and has been rushed to Gomoa Potsin Polyclinic while the suspect has been rescued and sent to Millennium Divisional Police Command due to the anger of the youth.

The victim is said to have been stabbed in some parts of his body, and excessive bleeding led to lightheadedness.

The suspect hired the motorbike to Gomoa Akrama and on the way going, he stopped the motorcycle rider and snatch the motor.

Giving insight into the robbery, the police disclosed that the "suspect believed to be in his thirties hired a motorbike from Akotsi to Gomoa Akrama, but upon reaching a section of the road, spraying the rider’s eyes with powdered pepper before bolting with the motorcycle." He added.

The driver is said to have alerted colleagues who gave the thief a hot chase, leading to his arrest, and was beat up even stabbed by a knife on his body.

The police are still investigating the issue to arrest all those who get themselves involved in this issue and promise to make sure that the law will take its course.