By Ghlatestupdate (self meida writer) | 1 months 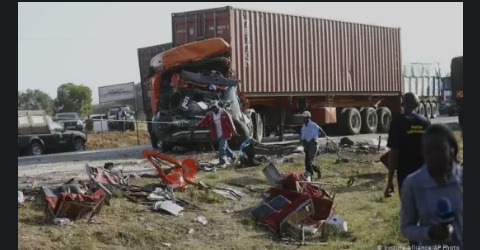 Careless overtaking that was pushed by two truck drivers have caused the death of three people. He traffic police operatives have weighed into the matter and are now investigating the case. Another person was also a victim of the incident after sustaining serious injuries. The corpse of the deceased have been deposited in a mortuary known as Voi Mortuary to undergo post mortem. The Kenyan man who sustained injury was admitted in the intensive care unit of Voi Referral Hospital.

Onlookers told journalists that the two trucks collided head to head. They said the collision happened after one of the careless driver overtake another car and before he could return to his lane, he rammed into another vehicle. An Eyewitness told our correspondent that the three person' s died immediately and was moved to the above mentioned mortuary. The tragic incident happened at Musharinyi along Nairobi- Mombasa highway in Voi county, Kenya. The people who died in the accident were reported to be the two drivers controlling the two vehicles and a helper. We also learnt that the fourth victim who sustained injuries is also a helper attached to one of the vehicles.

The authority is yet to confirm the report and the identity of the victims are still masked. However, the families of the four victims have received the news of the incident and are currently making plans to save the bury the three deceased, while making sure that the life of one of victims is preserved. " Thanksgivings gose people who came to assist immediately the accident happened. The other person would have been dead by now if not that people were around. He was helpless when we came there and he was losing blood. We took him to the hospital. The Doctors tried their best. " An eyewitness, Giossa told reporters.