By kuulpup_thepromoter (self media writer) | 3 months ago 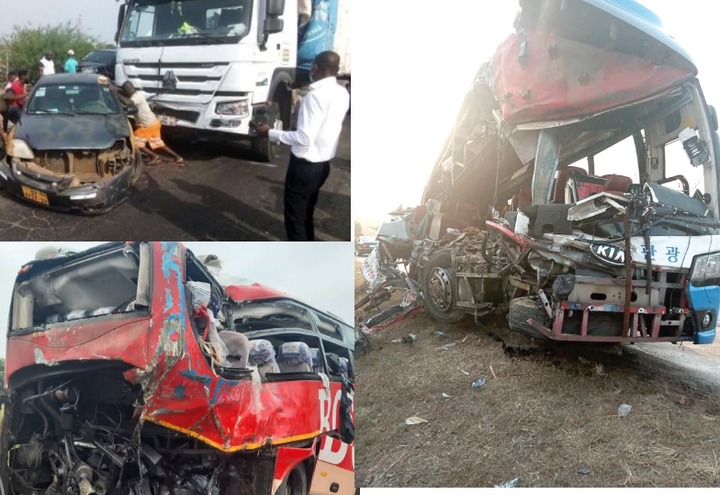 Four (4) person's have lost their lives with thirty-nine (39) being injured on the Tuobodom-Techiman road in the North District of Bono East Region on the Kintampo-Techiman Highway around 3:30 am toady. The victims of the accident were a mother, her four (4) year old son, and nine-month-old baby boy, and the bus driver's mate with thirty-nine (39) more passengers getting injured in several degrees. The injured, including an officer of the Ghana Immigration Service (GIS) have were sent to the Techiman Holy Family Hospital for treatment. The accident occured when a KIA Grandbird bus from Bolgatanga to Kumasi ran into a broken down DAF articulator truck in front of the Tuobodom Senior High School.

The articulator truck had two different Burkina Faso number registration numbers - KM-1338 at the front and KM-7337 at the back. There were no warning triangles or reflectors to warn incoming vehicles and other road users. The accident was confirmed by the by the Bono East Regional Director of the North Road Safety Authority, Mr. Emmanuel Akyeampong-Parry who explained that “The bus driver, who also appeared to have lost concentration or could possibly have been sleeping while driving at top speed, crashed the bus into the rear end of the stationary articulated truck." 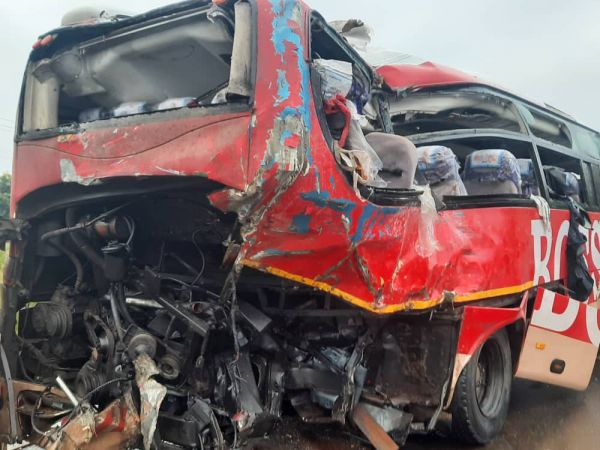 One of the surviving passengers, Fredrick Izonhini who was seated behind the driver said he released the driver was sleeping while veering towards the stationary truck and tapped him to wake up after which he attempted to steer away from the truck but crashed into into the truck instead. The passenger further revealed that he and the other passengers in the bus had complained about the loud music which was being played in the bus but the driver explained that it was a way to keep him awake throughout the journey.

Officer of the Bono East Regional Fire Service, DCFO George Annim Frimpong said that officers of his outfit had to cut through the wreakage to retrieve the bodies of the dead passengers. Both driver's of KIA Grandbird and the articulated truck had been sent to the Techiman Police Department for interrogations.