79-year-old Man, 5 Others In Police Grips For Inserting Stick In Teenager’s Anus 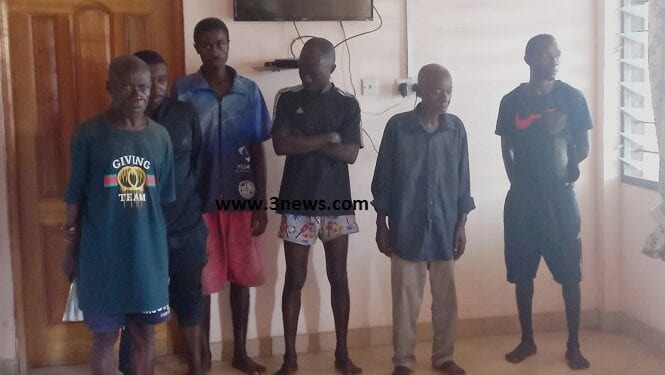 The act of 79-year-old man including six other men have been arrested by Konongo Divisional Police after inflicting physical harm or unwanted physical contact upon on a 16-year-old boy they alleged to be a thief.

Enock, 16 years old alleged victim to have broken into the shop but was caught and his hands and legs tied.

The six arrested men then forced a stick into his anus. The bizarre act, which was recorded in a video, went viral on social media and led to the arrest of the perpetrators.

The District Police Commander for Asante Akyem North Chief Superintendent Owusu Bempah explained that “after watching the video and upon thorough analysis with some natives of Agogo, we were able to identify those who committed the crime in the video and swiftly arrested them.”

Owusu Bempah further indicated that “one of the suspects named Francis Obeng Amoako aged 79 confessed and later claimed after inserting the stick into the victim’s anus, they untied him and then the victim removed the stick and left.”

Content created and supplied by: Kwasi4322 (via Opera News )