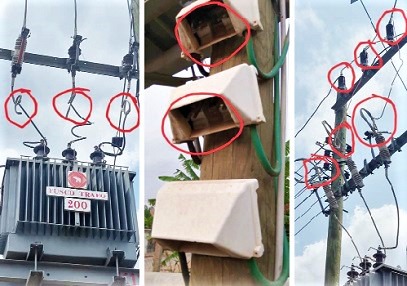 The Electricity Company of Ghana's (ECG) continuous inspection of its infrastructure in the towns of Yilo Krobo and Lower Manya Krobo has uncovered damage to some of its facilities, including transformers at 81 substations, as recently as last night.

The ECG operates 147 substations across the two towns. The corporation has estimated the damage to be GH5 million on the cautious side.

The ECG's Head of Communications, William Boateng, told the News yesterday that the evaluation team discovered that most of the transformers had their earth linkages cut, the LV fuses removed and poles cut down. Furthermore, he claimed that the transformers and cable ends that had been disconnected during the power outage in the two municipalities had been reconnected by unidentified individuals.

Somanya, Sra, Social Welfare, Akwenteymah, Sawer, Ogome, New Somanya Up, Abonse, Atuah Down and Top, and Lasi Market are among the places Mr Boateng has visited.

Despite the development, the communications director stated that the company was working around the clock to repair the damage and correct the anomalies so that power could be restored by the end of the weekend, as agreed upon by the committee formed by the Ministry of Energy to resolve the impasse between the power supplier and the people of Kroboland over the installation of prepaid meters in the area.

The committee agreed that the ECG will analyze the integrity of the infrastructure for safety and security in preparation for power restoration as part of the road map.

The team discovered that three of the high tension poles had been damaged during a similar exercise this week.

The entire Kroboland had been without power since July 27 of this year due to a misunderstanding over accrued bills and the installation of prepaid meters. There had been considerable opposition and claimed attacks on ECG officials as they went about their responsibilities installing the prepaid meters.

Thus, a committee was formed to develop a plan for not only resolving all outstanding problems that prevented the power from being restored, but also making sure that the local leaders had everyone agree to the installation of the prepaid meters and had established a secure and tranquil working environment for the ECG staff there.

The ECG requested, as part of the road map, that the infrastructure be evaluated for its integrity for safety and security and that any anomalies be fixed in preparation for the restoration of power. That came when it discovered that a few of the high tension poles in the neighborhood it served had suffered damage.