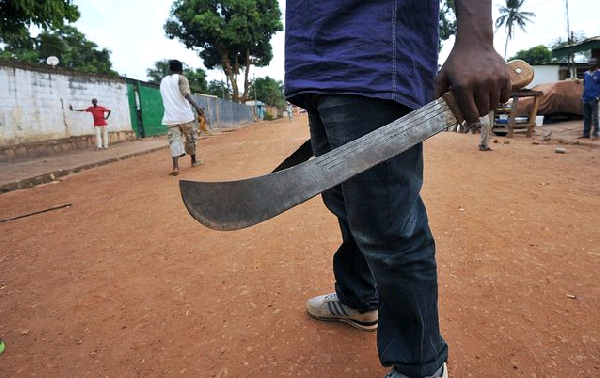 A 63 year-old palm wine tapper, Teye Gordon popularly known as"Kampala" has butchered his son at Assin Amanbete, near Assin Anyinabirem in the Assin South District of the central region for tapping wine from his palm trees.

Narrating the incident to Angel Fm's, Kwame owusu shadrack, the victim Isaac Kwame Tettey 31, said he was a sleep on the night of Monday October 4,2021, when his father attacked him with machete.

He avert that the Father might have attacked him for fighting his brother who he has been tapping wine with from their fathers palm plantation.

"My brother had planned we should tap palm wine, but our Father was having some some of the palm trees, so he (my brother) fell some of them in addition to what we were going to tap, because he had said he wanted 100 pieces.

So I agreed to work with hand in hand him, so the little we gain, I can also get my share.but after some time my brother complaint about my attitudes towards the work and suggested he was going to hire a third party to work with.he said.

This didn't go down well with Kwame Isaac, who appealed to his brother to rescind his decision,because we have started working from the unset.this led to a heated arguments which we later settle.

My Father after, we have ended the argument called me from my sleep on Monday night, and in attempt to respond to his call, entered the veranda and started inflicting cutlass wounds on me.he the victim said.

The victim who sustained severe injuries suspect the father's actions is due to the misunderstanding between the two.kwam tetteh has been admitted at the St Francis Xavier hospital in Assin fosu receiving treatment.

Meanwhile, the suspect has been arrested by the Assin Anynabirem police command and assisting with the investigation.