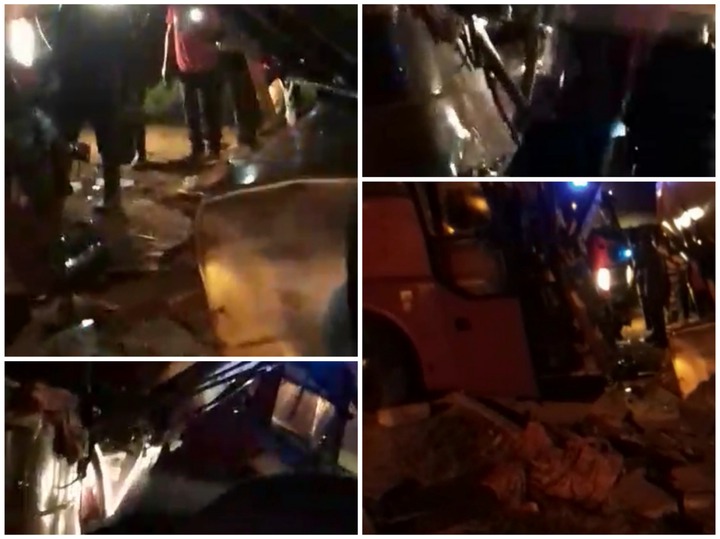 It was a terrible scene, as officers of the National Ambulance Service struggle to rescue lives from the accident. It happened at 10:30pm last night just around Saltpond, in the Mfantsiman Municipality of the Central Region.

It involves a VIP bus with registration number GT 5255 17, and a petroleum tanker on the Mankessim- Cape Coast Highway. Residents were alarmed by the sound of the clash and the screens of victims.

The collision was so strong that the heads of both vehicles were crushed but the impact on the VIP bus were pretty much damaging. The driver of the bus according to eyewitness died instantly upon impact, and his conductor gave up the ghost upon reaching the hospital.

Assembly member for the Nkubeam Electoral Area, Saltpond, Francis Ekow Dotse says it took the Ambulance Service to cut open some metals to enable them remove the body of the conductor and that of the driver. He noted that three out of six passengers onboard the bus who sustain injuries are in critical condition at the Cape Coast Teaching Hospital.

The other victims have been discharged early this morning after recieivng treatment, he added.

In detailing how it happened, Mr. Ekow Dotse said, the VIP bus attempted to overtake another vehicle UT ended up colliding with the tanker driver. The bus per his investigation was bound for Samreboi in the Western Region, and the tanker driver heading towards Accra after discharging some fuel.

"I was called by a collage that an accident had happened. I rushed to the scene and was overwhelmed. It was a bus and a tanker. One dead, the driver of the bus was already dead from the impact. The conductor was stuck between crushed metals and was breeding. It took fire service officers and the ambulance service hours to cut him lose from the scrap.

"He was reported dead upon reaching the hospital. Nine of the passenger onboard the bus got injured but the condition of three are very critical. But I am told they have been stabalizsd this morning," he said.

The debris have been cleared from the road and investigations underway. The Mankessim-Cape Coast highway on the N1 is one of the most dangerous roads in Ghana. Dozens have lost their lives on that stretch.

Despite caution and reminders about the rate of accidents recorded on that road mounted along the highway they appears to have no effect on the conscience and attitude of drivers and other road users .

Police check point has been mounted at several places to check on overspending and reckless driving as well as robbery but this hasn't stopped the accidents from occuring.